Whisky Review Round Up: BenRiach Limited Releases 2018 - The Whiskey Wash

In a time when specialization seems to be the driving force behind everything from career development to sneaker design, there’s something refreshing about the Renaissance approach. If you like Scotch whisky—any kind of Scotch whisky, from purist to port-finished—there’s a BenRiach whisky for you.

Located in the northern part of Speyside, the BenRiach Distillery is proud of its experimental, eclectic approach. It makes peated and unpeated spirit, occasionally dabbles in triple distillation, employs a vast range of cask types in its warehouses, and even fires up its still-operational floor maltings every once in a while. The result is a vast palette of finished whiskies, which are combined (or not) under the watchful nose of master blender Rachel Barrie, who also oversees product creation at sister distilleries GlenDronach and Glenglassaugh.

A little background: All three of these distilleries were acquired by Brown-Forman in 2016 from a consortium led by Scottish entrepreneur Billy Walker. Walker is credited with reviving all three distilleries, especially BenRiach, which had been mothballed by Pernod Ricard in 2002. It’s not a bad comeback story: from totally inoperational in 2004, to winning Global Whisky Distiller of the Year in 2015 at the Icons of Whisky awards.

Due to that Brown Forman purchase, Americans are starting to see more from these three Speyside producers. Earlier this year, BenRiach announced the release of several limited-edition whiskies to the U.S. market, including some cask strength offerings, to show off the distillery’s remarkable range. We received three samples from that larger collection: BenRiach Classic Cask Strength Batch 2, BenRiach 10-Year Virgin Oak Single Cask #7367, and BenRiach 12-Year Peated Port Wood Finish Single Cask #2683. Tasted together, they manage to showcase the distillery’s versatility as well as reveal a certain unifying character centered around chocolate, mint, and gentle fruit. Let’s taste. 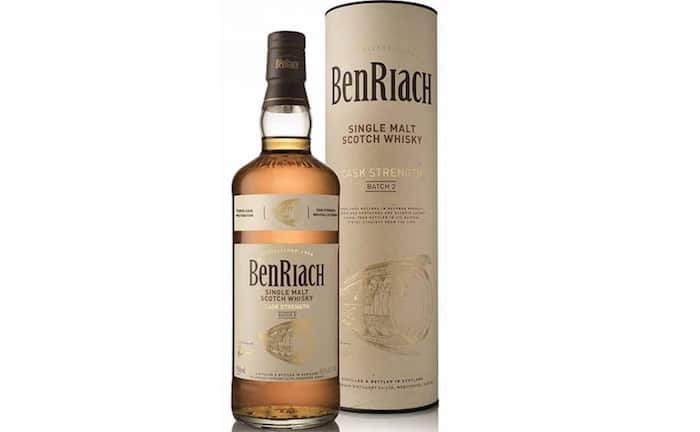 Palate: Nice. Big peanut brittle, toffee, bread crust, honey, chocolate, black pepper, dried apricot, walnut skins, malt, and a touch of eucalyptus in the finish for a cooling, mentholated edge. There’s a touch of sulfur that evolves over time, giving this whisky a low-end gaminess that reads as pleasantly savory. For how strong it is, it’s very approachable. Water sharpens it up a little, adding some tart orange.

Final thoughts: This is a classic, elegant Scotch at a nice price point for its heft.

Palate: Again, chocolate is the driving force here. Cocoa, walnuts, orange zest, molasses, and cloves, dosed with plenty of oak for a grippy finish that tastes every bit of its 118.8 proof. Water tunes it up, retaining the chocolate, bringing out fruit, and mellowing the tannin.

Final thoughts: Nice and rich, very after-dinner. A little tannic for me but I bet serious bourbon fans would love this.

Appearance: The darkest of the three, still in the amber realm but veering towards mahogany.

Nose: This smells like an American barbecue – sweet and saucy ribs, mesquite smoke, melty grilled peaches, and a touch of truck exhaust. The port and peat influences are easy to identify. It’s unusual but compelling, very culinary.

Palate: Extremely smoky up front, with billows of wet smoke and candied segueing to a kind of sickly, mentholated fruitiness in the finish. Italian amaro, Robitussin, and menthol cigarettes.

Final thoughts: This is the whisky equivalent of a blind date gone horribly wrong: Two strong personalities in a small room together who aren’t getting along. Not for me – although maybe it’s for you?