I’ll admit to being a tad bit of a cynic when it comes to awards and accolades, especially in the commercial realm, and that includes whiskey. This one, in fact, was named “World Whiskey of the Year” in 2021 by a well known whiskey author. Over the years, there have been a few head scratchers, when it comes to such things. In any case, reading about this whiskey only spurred my curiosity.

In regards to what goes into the bottle, Alberta Distillers does focus on the grain to bottle process. Ingredients are sourced from local farms and water sources. Also, as will happen, the company has sold off some of it’s juice to other producers including Masterson’s and Whistle Pig. It took awhile for the distillery to really get in the whiskey game, however, as they eventually released cask strength whiskeys in 2019. That may not sound like much, but to do so means putting out product that is true to the distillery.

“Alberta Distillers prides ourselves on being the producer of the world’s number one selling 100% rye whisky in Alberta Premium,” George Teichroeb, General Manager of Alberta Distillery said, in a prepared statement at the time of its release. “We wanted to release a cask strength rye so our whisky fans can experience a 100% rye whisky in its purest form: straight from the barrel. This whisky truly is a great representative of our commitment to crafting superior rye whisky.”

Alberta Distillers kept this one local for a bit before finally releasing to the United States market. For months, the whisky would quickly sell out as production catches up with demand. However, such is probably the best practice, as one cannot rush the aging process. 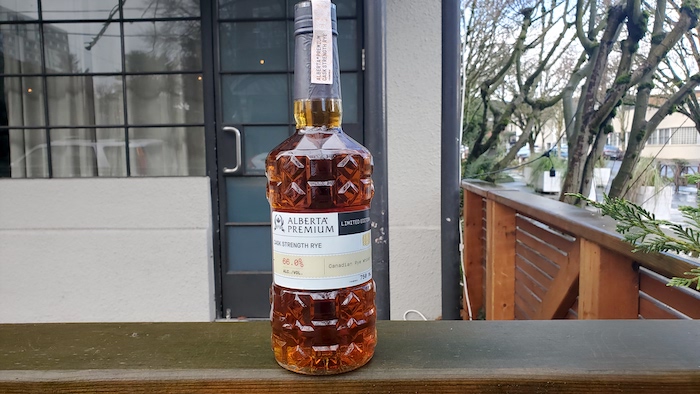 Appearance: Bronze with a touch of amber. In the glass, the legs were slow to emerge and pretty far spaced.

Nose: Hot, hot, hot! After airing out the glencairn glass for a moment, I was able to pick up some citrus up front, but there was another element that took a few minutes to place a name to. After looking through cabinets and whatnot, I found it. In the background there’s a bit of Earl Grey tea to the nose.

Palate: There’s a lot going on with this one. However, the first impression is of sweet honey notes, hot, with a touch of spice. Digging a bit deeper, there are elements of lemon and orange zest. It’s definitely rich, but also bright with the citrus components, and just enough earth in the finish.

Right out of the gate, this one will punch you in the face. It's big, boozy, and raw. As is, the whisky can come off as pretty simple with simple, pronounced flavors. I tasted this one a few times to figure it out. Always solid, but definitely benefits with the addition of water or ice to take things down a notch. With a little dilution, there's more levels of flavor and accents of what you may have already picked up.

Do you pick up a bottle? If you can find one at market price, then yes, but probably not much more than that.

4.0
User Rating 3.06 (49 votes)
Sending
34
Shares
11.8k
Views
Share on FacebookShare on TwitterGet Our Newsletter
Cheers to the Dads! Personalize a bottle of his favorite whiskey to create a modern gift for the modern man. Use code: FATHERSDAY20 for $20 off your next order of $100 or more at ReserveBar