Editor’s Note: This whisky was provided to us as a review sample by Abasolo. This in no way, per our editorial policies, influenced the final outcome of this review. It should also be noted that by clicking the buy link towards the bottom of this review our site receives a small referral payment which helps to support, but not influence, our editorial and other costs.

“Ka-ka-wha-SINT-lay.” Cacahuazintle is a very old, very special type of corn grown in the higher elevations of Mexico. Its chubby, pale kernels are familiar in traditional pozole. It’s also the foundation of Abasolo Whisky, grain-to-glass made in Mexico and newly available to select US markets. Corn’s homeland is Mexico, and this whisky is made to celebrate it.

Your average American-style whiskey starts with yellow dent corn: the standard field corn, the one more often used to make biofuels and feed livestock. It’s either been hybridized or genetically modified for market readiness: disease resistant, herbicide resistant, pest resistant, high-yielding, long-storing or all of the above. No decision with that corn is made with an eye toward flavor. Cacahuazintle has been handed down through generations for the way it tastes.

And, most North American whiskey isn’t made from corn alone, there are other grains, be they wheat, rye or barley. Abasolo’s technique allows them to use just corn, because they get creative with the treatment.

After being field-dried, a small percentage of the corn is malted. The majority of the corn is nixtamalized. This is the same process that prepares corn to be made into masa, and then tortillas, tamales, and other Mexican staples. The corn is soaked and heated in a lime bath, rinsed and then hulled.

(Nixtamalization might have begun accidentally, through the use of hot limestone rocks to boil cooking water, but it lived on for a number of benefits. First off, it removes poisonous compounds from corn: when the plant is damaged by pests, molds can invade the tissue and these fungi produce aflatoxins. These are dangerous to both humans and livestock. The nixtamalization process also breaks down hemicellulose and pectin, making the corn easier to digest, and releases niacin. Flour from unprocessed corn won’t hold together as a dough, but masa will.)

Most importantly for whiskey, nixtamalization opens up the floral sweetness and warmth of the grain, and allows for milling a finer flour, so that more of the starch can become sugar, and those sugars can become alcohol.

Beyond their corn sorcery, Abasolo’s method is typical to many craft distilleries: slow fermentation of the wort followed by double pot still distillation and maturing in a combination of used and new toasted oak barrels. The barrels are kept in an unwalled rick house, subject to the climate of Jilotepec de Molina Enriquez, in the state of Mexico. 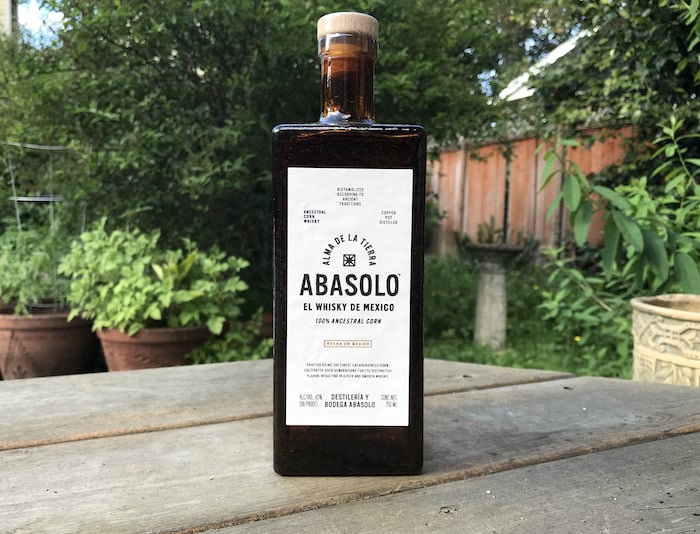 Vital Stats: Abasolo Whisky is 86 proof, made from 100% Cacahuazintle ancestral corn and aged for an undisclosed length of time. It’s available in Arizona, Texas, California, Florida and New York at $40 for a 750mL. Tasting conducted in a classic Glencairn.

Appearance: In the glass, Abasolo Mexican Whisky is very clear and pale gold, like half-oaked Chardonnay, forming quick, medium legs The amber custom-cast square bottle is textured and substantial, and looks like an artifact from the frontier West.

Nose: This spirit smells unoaked and solvent, with a volatile florality mixed with dry popcorn kernels and pencil shavings. At the end of the inhale, I could just get fresh tortilla.

Palate: Whew! Hot, abrasive, and young. There’s a masa sweetness under there, but it’s largely buried. Adding water only made it more aggressive. The mid-palate is full of woody bitterness and gives way to a short, scratchy finish.

I really wanted to like this whisky. The process is clever and thoughtful, the raw material is the kind of crop I want to support, Abasolo’s business practices seem high-minded. I tasted this whisky before my research (or even reading the bottle), and it’s amazing how much I can taste the process in the liquid. It’s just not an enjoyable experience yet. What I want now is to slip this whisky back in the barrel and revisit it in four years or so.