Latest Whisky Made From Mexican Corn Set For U.S. Debut

The world of whisky made from Mexican corn is a relatively small one on the global export stage. We took notice sometime ago of the Sierra Norte offerings, distilled from different colors of Oaxaca’s traditional heirloom corn. Another new Mexican whisky label is now set to join these, and it is called Abasolo, made from 100% ancestral Mexican corn.

The new Abasolo, according to those behind it, has an interesting back story to it. The brand’s co-founder and distiller, Ivan Saldaña, “tested dozens of heirloom varietals of corn until he landed on Cacahuazintle (pronounced kaka + wha + SINT lay), a locally grown, GMO-free variety that has been passed down by generations of local farmers. The thick, textured kernels provided the boldest flavors.

“These flavors are further drawn out by a 4,000-year-old traditional process called nixtamalization, in which the corn is soaked and cooked in an alkaline solution (usually a lime bath), washed and then hulled. Commonly used before corn is ground into masa and made into tortillas or other Mexican staples, nixtamalization unlocks the full flavor profile and aromas of the ancient crop. 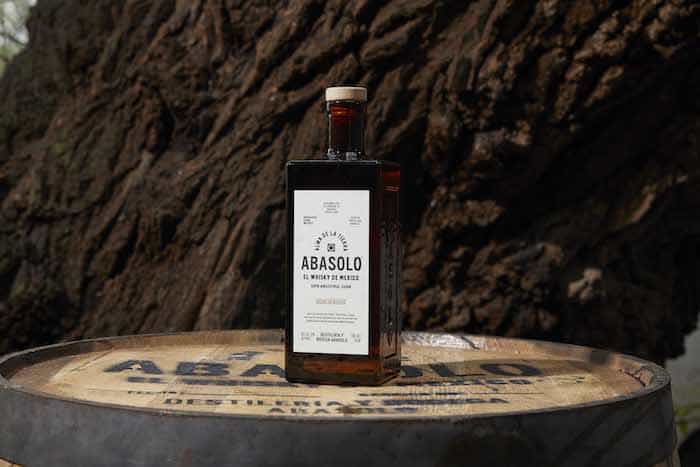 “Nixtamalization, though never before used in spirits production, has remained a largely unchanged technique since it was developed thousands of years ago in Mesoamerica and used by civilizations such as the Mayans, Aztecs, and Olmecs. When used in the production of Abasolo, the process allows the distillery to leave other grains out of the mash.

“All of this happens at Destilería y Bodega Abasolo…located in Jilotepec de Molina Enriquez. There, the liquid undergoes double distillation in handcrafted copper pot stills and is finished in new toasted and used oak casks.”

“We’re excited to introduce something truly new to the world whisky category,” said Saldaña in a prepared statement. “Historically, whisky classification has been defined by the traditional Scotch, Irish and American identities. We’re not only bringing to life a product that is extremely unique, both in taste and process, but we are doing so by highlighting the culture and ingredients endemic to our land to innovate in an already vibrant and rich category.”

As its stands now plans call for Abasolo to be made available in early May for a price point of around $40 per 750 ml bottle. Limited official tasting notes suggest “roasted corn on the nose along with hints of leather and vanilla, and a sip will unlock notes of black tea, toffee, and honey.”

497
Shares
2.7k
Views
Share on FacebookShare on TwitterGet Our Newsletter
Get The Macallan® Rare Cask at ReserveBar. Shop now!