Editor’s Note: These whiskeys were provided to us as review samples by Treaty Oak Distilling. This in no way, per our editorial policies, influenced the final outcome of this review. It should also be noted that by clicking the buy links in this article our site receives a small referral payment which helps to support, but not influence, our editorial and other costs.

Treaty Oak treats its Texas roots seriously: According to their website, the distillery is named after the “the famous 500-year old tree in Austin, under which Stephen F. Austin signed agreements defining the borders of Texas.” In addition to the whiskeys they put out, Treaty Oak also makes a gin named Waterloo: Austin’s original name. It’s been around since 2006, when it was founded by Daniel Barnes; at the time, it was only the fourth distillery in Texas.

This past September, Treaty Oak added a new whiskey to its line up: Treaty Oak Day Drinker Bourbon. At 80 proof versus its flagship bourbon, Ghost Hill Texas Bourbon, which hits 95 proof, this is geared for—you  guessed it—day drinking. Why one needs a lighter liquor in the day is kind of beyond me, but hey, who doesn’t love some good schtick? This whiskey is “100% percent Texas-made grain-to-glass bourbon that’s born from Texas wheat and yellow no.1 corn from Barton Springs Mill, proofed using limestone-filtered water, and aged for one year under the hot Texas sun.”

Treaty Oak has also come out with a bottled Old Fashioned, which notches down the proof even more, coming in at 76 proof: All you need to do is crack the bottle and pour it over some ice. (Editorial note: Not the big cube, please. I hate the big cube.)

I was interested to learn more about this growing brand and how these stacked up–on their own and compared with each other. I got to sample three of ‘em: Ghost Hill Texas Bourbon, Treaty Oak Day Drinker Bourbon, and Treaty Oak Old Fashioned Cocktail. 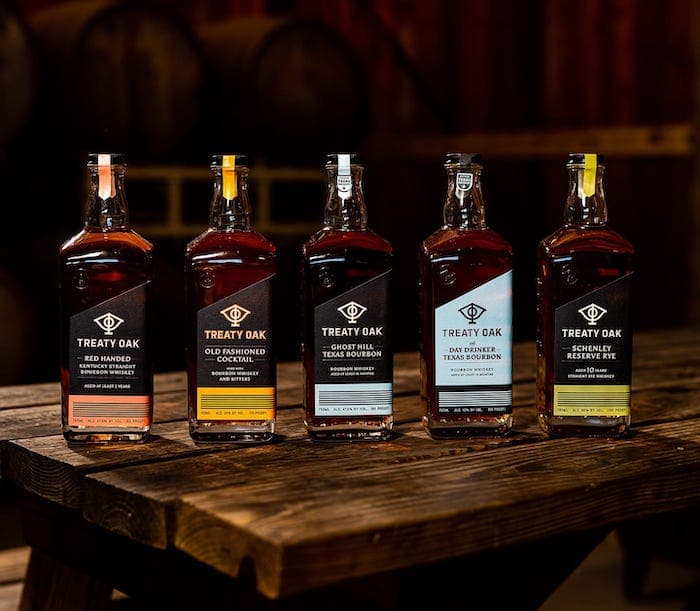 The Treaty Oak whiskey line up (image via Treaty Oak)

Palate: I like this. It’s a bit peppery on the finish, which I don’t mind, reminds me of a rye with that kind of spice. It’s a solid choice—reminds me of some of the commercial standbys I reach for when putting together a Manhattan, like a Bulleit.

Appearance: Much lighter than its nighttime sibling. This is a watery gold in the glass. The gold of a very pale 14k necklace chain.

Nose: Very subtle. So light as to be inoffensive. More washed out than day-drinker-light. A faded floral perfume with tuberose and gardenia notes. Also: berries and thawed frozen mango.

Palate: Eh. This is all right. It’s washed out on the palate, too. I feel like this should have been aged a little more, or…something. It tastes like I drank this before it was ready, like a wine I should have been more patient with. Maybe more time in the barrel would have rung my bell a little more? I’d consider using this in a recipe with other, bolder ingredients; otherwise I found it light and forgettable. You don’t need a special blend for the day, folks: Just put your big person pants on and drink real whiskey when the hour suits you.

Appearance: Glossier than the Day Drinker but not as robust as the Ghost Hill. Has a tinge of navel orange in it, along with the shine of good bourbon.

Nose: Well, they got the nose right. It certainly smells like an Old Fashioned. There’s citrus peel, orange zest, and some bitters–but not too much. And instead of Angostura bitters, it’s more like intensified orange bitters. So: very orangey.

Palate: This is interesting and I don’t mean that in the tactfully avoidant way. Although it’s not something I would normally ever willingly purchase—I like making my own drinks and my way—this is still kind of fun. It’s a novelty. It reminds me of a less-sophisticated barrel aged cocktail. I’d give this to someone who says they don’t like whiskey but is secretly curious about whiskey.