Editor’s Note: These whiskeys were provided to us as review samples by Treaty Oak. This in no way, per our editorial policies, influenced the final outcome of this review.

If you’ve ever had the pleasure of a Treaty Oak whiskey, you were most likely in Texas. Their well-regarded spirits and folksy branding didn’t originally make it out of state on a regular basis, but all that is changing. Thanks to a partnership with Mahalo Spirits Group (MSG) and a sharp rebrand by Crispin Porter+Bogusky, the brand is set to take on a broader foot print, including markets in the American south and midwest. This will include all three whiskeys reviewed here: the Red-Handed Bourbon and Red-handed Rye, and the Ghost Hill Texas Bourbon.

You might recognize MSG from their founding share of Angel’s Envy, which was acquired in 2015 by Bacardi. In addition to Treaty Oak whiskey (and its gin line, Waterloo), the group is growing Papa’s Pilar Rum and Suerte Tequila. These brands have the flashy imagery and precise story craft to make any marketing professor proud.

How much this transition is affecting things on the ground is hard to say. Treaty Oak started as a small operation: “an eclectic and brilliant team of rebels” interested in making spirits that were quality, while offering something different to the connoisseur.

The experiment started in 2006, with CEO David Barnes, and he appears to remain at the helm. In a prepared statement, Barnes said “Mahalo was the best strategic and cultural fit for both our team and brands. Beyond their industry expertise and first-rate resources, we instantly felt a genuine connection and a shared purpose.”

I’m one to root for the small brands with a commitment to exploration. I’m automatically suspicious of dollars coming in and ruining something beautiful. It’s my hope for Treaty Oak that they benefit from this relationship, continue pushing boundaries, and still make spirits we get excited about.

With that, let me get down off my soapbox and see how this initial bottling went. 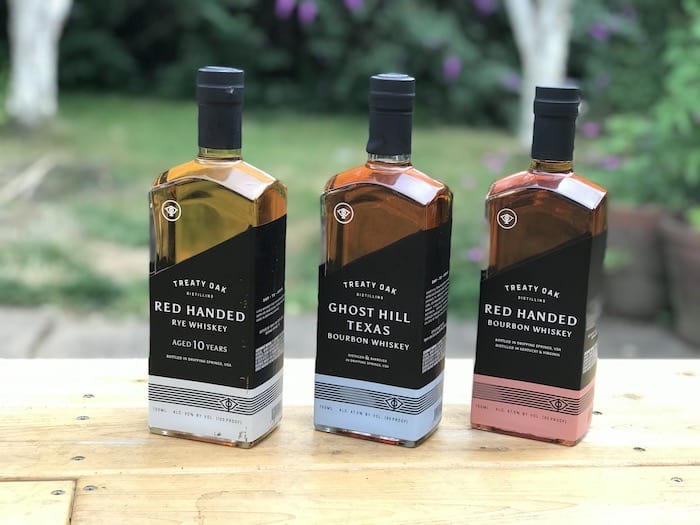 Vital Stats: This whiskey clocks in at 95 proof, and is made from 57% Yellow #1 corn, 32% Texas soft white winter wheat, and 11% barley. It’s aged for two years “under the hot Texas sun” in char three American Oak Barrels. Distributed to Florida, Georgia, Illinois, Michigan, Tennessee and Virginia, found in 750mL bottles for $49.99.

Nose: The Ghost Hill smells of a gingerbread house on the seashore. I found a hint of cooked flat beans in there, too.

Palate: Quite fiery on the palate, it’s savory and dry – very lean. Minerals dance over the mid-palate, spreading out to cacao nibs, leather and clover honey. The finish is short and clean.

Final Thoughts: This is a whiskey for the bone-dry white wine drinker. It’s delicate and straightforward. I want a little more oomph for my neat-drinking pleasure. This is perfect for elegant, subtle cocktails.

Palate: What a contrast on the palate! It’s robust and spicy, with allspice, clove, black pepper, and a whisper of cinnamon. Cedar on the mid-palate, it’s round and creamy on the back-palate. The liquid is weighty; slightly oily on the tongue.

Final Thoughts: The rye is working well. Velvety, solid, enjoy this on the back deck or in your favorite spirit-forward cocktail.

Nose: Cigar box and sandalwood on the nose, with toffee-on-shortbread and white pepper. Banana peel tones come out as it rests in the glass.

Palate: The palate is lots of blue fruit and a sprinkle of salt. The cookie aromas come up as caramelized sugar and vanilla bean on the mid-palate, with spice – allspice, nutmeg and black pepper coming around on the back of the tongue.

Final Thoughts: This whiskey has some nice complexity. It’s not rich for a bourbon, maybe accounting for its youth. I’d love to taste the same in a few years.