Editor’s Note: These whiskeys were provided to us as review samples by Cadée Distillery. This in no way, per our editorial policies, influenced the final outcome of this review. It should also be noted that by clicking the buy links throughout this article our site receives a small referral payment which helps to support, but not influence, our editorial and other costs.

Barometric pressure. Not a phrase that gets your typical whiskey buff’s pulse going. According to Colin Campbell, though, it’s what takes some sourced spirits and makes them extraordinary.

Campbell is the crafter of spirits at Cadée Distillery on Whidbey Island in Washington State. “One of the prime movements for our whiskeys is the barometric pressure. As the air moves over the Pacific Ocean, over the Olympic Mountains and then over the Cascade Mountains, the pressure goes up and down like a yo-yo. Everything on the island is squeezed. People with sinus problems, rocks, whiskey barrels, everything.”

As the pressure increases, the whiskey is forced into the wood of the barrel. There, it finds those compounds we like that are brought out by toasting and charring. Then, as the pressure drops, the whiskey swooshes back out of the wood, with some of those compounds dissolved in it. (And, a bit of marine air is drawn through the porous oak.) Of course, this process happens with every barrel whiskey ever, but on Whidbey Island, the spectrum of change is perhaps a bit wider, and the pressure fluctuates more often.

“We don’t have the temperature changes like Kentucky or Tennessee,” says Campbell, “but we’ve got the pressure, so younger whiskeys end up tasting like older whiskeys, and we can bottle most of ours at four to five years.”

Whidbey Island is one of the largest continuous peat bogs in America, so the water they’re proofing down with is special, too. Drawn through the peat, the water picks up minerals that are evident on the palate. “We don’t chill filter, so we leave those flavor compounds in there,” says Campbell.

Cadée has their spirits custom distilled, Campbell writing the recipes to showcase the flavors he’s looking for. “I look at what the grain will do: am I looking for more complexity, am I looking for sweetness?” At the end of the day, though, “It’s still just one person’s opinion. If you like it, great, if not, there are plenty of other whiskeys out there for you.”

Cadée brings the liquid home to mature, and then has a panel of ‘spiritual advisers’ determine what the final blend and proof will be: “I proof at 90-80 and then we blind taste: neat, with ice and in a cocktail. Whatever the consensus is, becomes the product.

“A well made [whiskey] doesn’t smack you in face. The flavor should be like waves to the shore, rippling across your palate.”

I asked Campbell where he thought the whiskey landscape was headed. “Millennials are looking for flavor profiles that connect with them, along with the price point and the packaging that resonates. In our parents time, it was status driven. You cared if the bottle you were drinking was 12 years old. Now that’s not the focus.

“Aged scotch ran out about two years ago, so they started blending in younger whiskeys. And if people enjoyed them, it didn’t matter. We don’t need to say it’s a 12-year-old blend. We can do what the hell we want.”

Soon, Cadée will release its own ‘scotch.’ “It’s not a single malt scotch, but I can call it one because I’m a Scot on the Isle of Whidbey. It’s quite like a Lowland single malt, seven years old,” produced in collaboration with a distiller in Portland, Oregon. I got a sneak peek of the single malt and a sherry-cask rye and threaded them in with the line mainstays: Cadée’s Deceptivus, Cascadia and Medusa. 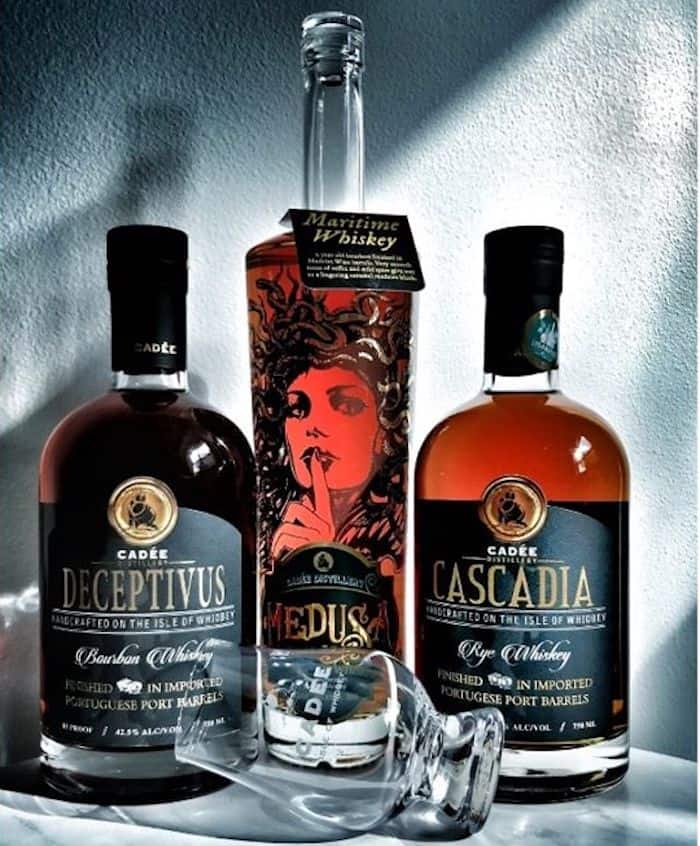 Appearance: In the glass, the bourbon is pale red-gold, very clear and slow to form medium-fine legs.

Nose: Sea air rises out of the glass, followed by ripe apricot that’s quickly displaced by crème brûlée. There’s a light scent, too, like fresh white flowers. A tiny whiff of smoke drifts through. Marzipan becomes dominant as it rests.

Palate: On the palate, there’s toffee richness somehow backed by Swedish-fish sweetness and orange peel on the sides of the tongue. Vanilla extract hits mid-palate.

Final Thoughts: A decent bourbon, balanced with no harshness. It has more going on than most sourced and groomed whiskeys.

Vital Stats: Cadée’s first rye clocks in at 87 proof. It’s made from 95% rye, 3% malted barley and 2% barley. The age is undisclosed, but I would guess a minimum of four years old. It, too, is finished in 20-year-old ruby port barrels. Look for it in select markets for around $50 for a 750mL.

Nose: The nose is subtle, fresh sheets on the line, saline and grass. Nutmeg then, and surprisingly, caraway. At first I thought my brain was playing word association with rye, so I went to the spices and sniffed. It’s totally caraway. All this dances over a banana-bread warmth.

Palate: Sweet and elegant on the palate, with a graham-cracker earthiness. Loads of black pepper and nutmeg come through on the mid-palate; the finish is spiced cocoa.

Final Thoughts: Yum – it has all the spice and none of the burn. I would be happy sipping this and discovering new layers for a while.

Palate: Cherry cola with a buttery weight, there’s a distinct twiggy bitterness on the front of the palate. Friskier than I expected, it doesn’t have the smoothness or integration of it’s higher proof siblings.

Final Thoughts: Medusa is not for me. Even though the mash bill is the same as the Deceptivus, it wasn’t as interesting. I’m not usually the person pushing for higher octane whiskey but this one felt a bit washed out.

Vital Stats: Cadée’s scotch-style animal is 86 proof, made from 100% malted barley and aged seven years. Not yet released.

Nose: It’s like you’re on the malting house floor, with all the cereal sweetness, new little plants, rain, and springtime. There’s a rush of salt air and a sprinkle of white flowers.

Palate: Funky and toasty with a clean sweetness backed by leather. The finish is hardy herbs.

Final Thoughts: The clarity at work here is really in keeping with the style. It’s a worthy effort and a good sipper.

Vital Stats: Our second rye of the hour ticks up to 96 proof. It’s made from 95% rye, 3% malted barley and 2% barley. The age four years and it’s finished in sherry barrels. Not yet released.

Nose: At first, I think it’s somewhere between maple syrup and molasses. Then I realize, it’s gas station hazelnut cappuccino – in a good way (only for you, dear reader, do I reveal my occasionally low-brow tastes), and that the caraway of the Cascadia has morphed into sweet black licorice. Is that oolong tea, too?

Palate: All that spice is now wrapped in a savory overcoat. It’s crazy complex and feels like the flavors of a banquet: roasted meat and black pepper. Toasted rice and dried tart cherries.

Final Thoughts: Wow. I obviously enjoyed the rye and the sherry finish took it to a whole other level. Some ryes in sherry are heavy handed, this lost none of its nuance. Delicious and worth seeking out a bottle.

17
Shares
1.9k
Views
Share on FacebookShare on TwitterGet Our Newsletter
Get The Glenlivet 18 Year Old at ReserveBar. Shop now!