Editor’s Note: These whiskeys were provided to us as review samples by Bardstown Bourbon Company. This in no way, per our editorial policies, influenced the final outcome of this review.

It took me a moment to figure out how to approach this set up. From the Bardstown Bourbon Company, I received a set of tasters consisting of four samples representing different stages of aging and blending. First off was of a raw distillate, then a slightly aged maturate, and then two unique blends from the Fusion and Discovery series. In this case, the samples were from version number three.

Luckily, I have been to a few whiskey classes that have covered similar bases in regards to the aging process. I was ready for the raw distillate or “white dog whiskey” and the maturate at barrel proof. Those tastings can be rough if you’re not prepared to have that high of proof straight to the nostrils and palate. In any case, it’s always a good idea to re-visit those stages in the whiskey process, so that one can appreciate the nuances of a finished product.

In 2019, the Bardstown Bourbon Company released their first versions of the Fusion and Discovery series. Both series are blends, though based upon different schools of thought. The Fusions are blends of younger whiskeys made in-house which are mixed with an older, sourced whiskey. The Discoverys, on the other hand, are entirely sourced, and are blends of an older variety, currently ranging from 10-15 years of age. Both serieses thus far have been blends of three different bourbons, though the fourth release in the Fusion series has four different whiskeys. 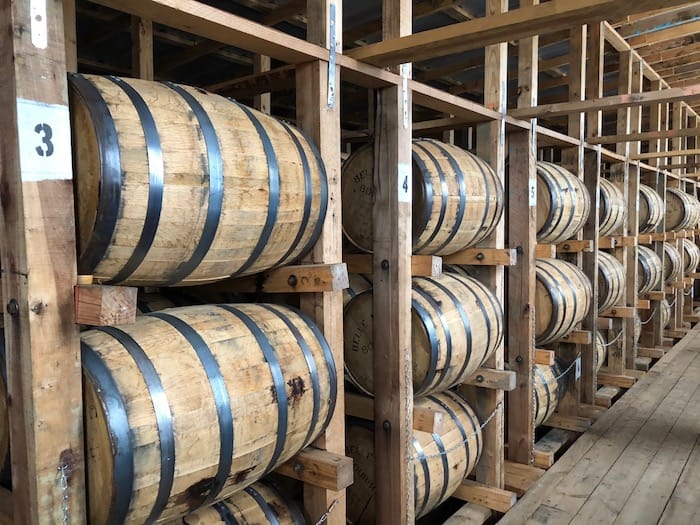 Nose: As one may expect, it the nose is pretty much all heat with a hint of toasted corn in the background.

Palate: Much like the nose, a great deal of heat at 120 proof, though there are the usual suspects of corn and cereal grain notes, albeit subtle.

Final Thoughts: I suppose, it’s what to be expected. It’s the bare bones of what will one day be an aged whiskey.

Appearance: On the lighter side of a burnt orange. In the glass, the legs were similar to that of the original distillate, though moved down the glass much more rapidly.

Nose: Essences of caramel corn, though the heat once again prevails the experience.

Palate: Though there’s no age statement for the maturate, there is a significant difference between this sample and the distillate. That said, there’s certainly more going on. A touch sweeter with the beginnings of honey flavors emerging. However, the balance isn’t there, though likely intentional as part of the tasting experience.

Final Thoughts: This was an informative middle step in regards to the process of maturing whiskey. The difference between this sample and the raw distillate were worlds apart, though not quite the finished product. You could pick up the beginnings of the aging, with flavors emerging from time in oak.

Appearance: For color, this one is a solid orange, slightly reminiscent of a hard candy. In the glass, the legs were sparse though long and slender.

Nose: First impression is big citrus up-front with a touch of caramel. Best to imagine freshly burnt orange peel with an accented sweetness. Upon the second visit, picked up a bit of fresh tobacco hanging out in the background.

Palate: The tasting experience was a bit of a conundrum. There’s a lot going on with this one. Sweet with a bit of heat, but after a bit, was able to discern a few other flavors going on. This one has a mix of orange and honey, but also another fruit element. It took a couple of tastes, but the whiskey does finish with a touch of red apple.

Final Thoughts: This is a great whiskey and says a great deal in regards to the blending processes. There’s certainly an added depth from the influence of the 13 year bourbon added to the mix. I enjoyed the blend of flavors, and though not very complex, had some great flavors.

Appearance: Orange with some reddish hues. In the glass, the legs were divergent and made their way down the glass with ease.

Nose: This one reminds me of a Manhattan. There’s an immediate hit of amarena cherry coupled with a certain richness one may expect from a good vermouth. It was unexpected, considering that there weren’t any finishes in wine casks, but there it is. The heat was also there, but not overbearingly so.

Palate: Wow, this is a big whiskey. Full bodied with a long finish, though not overly complex. Once you get through the higher proof, the bigger flavors show themselves. The primary elements are cherry and orange, with a sliver of milk chocolate. Upon the finishing moments, the orange becomes more prominent accompanied by a hint of cinnamon.

Final Thoughts: I thought this one to be a great simple sipper. It’s big, but a small chip of ice helps balance out the flavors and brings out more of the fruit elements. However, at the end of the day, I believe this one to be worthy of a special occasion Manhattan given the price point.