Expertise and longevity are still pretty thin on the ground in the world of craft spirits, so when the opportunity to taste an eight-year-old craft whiskey comes along, I, for one, stand ready to jump.

XO Alambic in tiny Dayton, Washington, was only founded last year. But its owner, Rusty Figgins, has been in the spirits industry for quite some time. In 2008, he helped found Ellensburg Distillery, Washington State’s second craft distillery, and later went on to be the founding master distiller at Batch 206, a prominent Seattle distillery.

All along, he knew he’d one day branch out to do his own thing, and he made some very smart moves along the way to plan for that future. One of those was to eschew the cash buyout he was offered when he left Ellensburg Distillery and take the whiskey, instead. Those barrels he distilled back in the early days of his career have been aging all this time, which is how a distillery that launched in 2017 was able to release an eight-year-old single malt in 2018 with its owner’s fingerprints all over it.

XO Alambic’s Scythe & Sheaf was made from a 100% malted barley mash featuring several specialty malts: 85% pale ale malt, 5% chocolate malt, 5% caramel malt, and 5% crystal malt. It was distilled on a unique still designed by Rusty himself. It’s called the Figgins Reciprocator, and it looks a little like a hybrid pot still in the midst of cellular division, with two separate pots leading to a single column. (Rusty now manufactures and sells these stills; they’re in use in almost a dozen distilleries around the country.) The whiskey was aged eight years in sherry casks, then transferred to late harvest semillon barrels for a short finishing spell. According to Rusty, it’s the oldest Washington whiskey there is. Does oldest mean best? I can’t wait to find out. 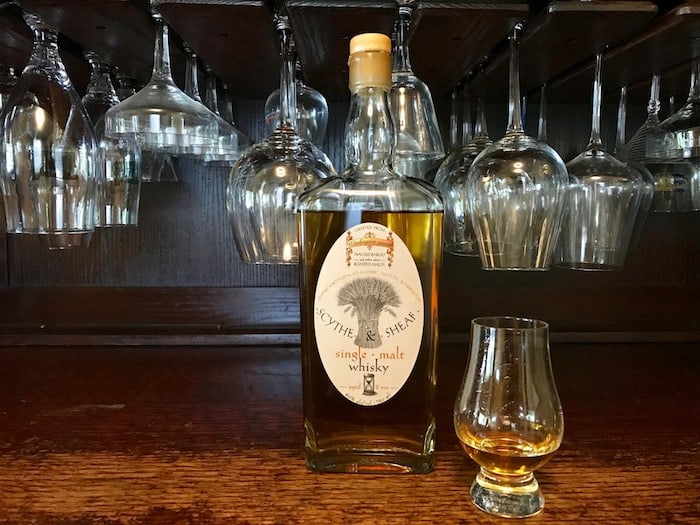 Vital Stats: Eight years old, made from 100% malted barley including roasted barley and caramel malt, aged eight years in sherry casks and finished in a late harvest wine barrel. 80 proof, retails for $100 at the distillery only (road trip?).

Palate: Again, heavy, with a rich and oily mouth feel. It’s got peanuts in spades—peanut brittle, peanut butter, peanutty trail mix—plus dried orange peel, dried fruits, brown sugar, caramel, and roasted malted barley. The late harvest semillon character is subtle, but I notice a few tart, slightly oxidative flashes as it evolves in the glass. The finish is long and rounded, with lots of roasty malt.

This is a rich, mellow whisky that lives very much in the Speyside/Cognac realm: rounded, cohesive, prizing harmony and integration over massive flavor intensity. It’s not a style I reach for regularly, but this whisky is well and intentionally made, with a clear point of view and a distinctive story. It’s easy to enjoy and would make a lovely end to a special dinner.