Writers’ Tears Irish Whiskey, bottled by Walsh Whiskey Distillery, is a blend of single malt and aged single pot still whiskies, the latter category referring to Irish whiskeys made from a combination of malted and unmalted barley on a pot still. This unique combination means that Writers’ Tears is technically a blend, but it’s one made entirely without grain whiskey. Irish whiskey once suffered from a reputation for being cheap or simple as a result of bootlegged Irish whiskies during Prohibition, but contemporary expressions like Writers’ Tears and many others are changing the way people think about Irish brands.

Writers’ Tears has a modern name, and its label is simple, cool-looking, and contemporary. It’s aged in American bourbon barrels, producing a light, smooth flavor profile. Walsh Whiskey Distillery began in 1999 with Bernard and Rosemary Walsh and their mission to create the perfect Irish Coffee.

In 2006, the company made a long-term deal with an Irish whiskey producer, and were able to make more whiskey to their specifications. This deal allowed the company to expand their distribution and get a head start on the rapidly expanding Irish whiskey market. 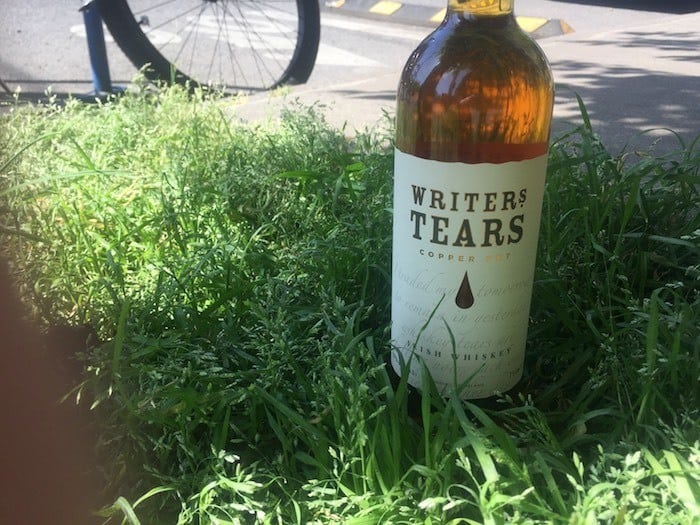 Appearance: It’s super vibrant – metallic copper and golden sunflower colors stand out. The bottle is tall and modern looking. I really liked the simplicity of the design. The legs are shiny and oily.

Nose: There’s not a lot of bite to it, but it’s got really nice layers of scents. First, honeycrisp apples, followed by vanilla ice cream, Honey-O’s, and blood orange. It smells like a spring day in an orchard, or a nice perfume.

Palate: The same layered feeling is going on with the palate. Crunchy apples, bright green grass, almonds. It’s got sweetness, but I wouldn’t call it sweet. The sugar dissolves from the tongue pretty quickly, leaving the more serious toasted oak and butterscotch tones behind. The flavors seem slightly muted compared to the bright aroma on the nose. The mouthfeel is oily, smooth.

Writers' Tears Irish Whiskey is a cool, modern example of Irish whiskey. The taste is light, slightly sweet but not saccharine. This would definitely would be accessible to anyone unfamiliar with Irish whiskey or pot still whiskey.