Editor’s Note: This whiskey was provided to us as a review sample by Woodinville. This in no way, per our editorial policies, influenced the final outcome of this review. It should also be noted that by clicking the buy link towards the bottom of this review our site receives a small referral payment which helps to support, but not influence, our editorial and other costs.

The Woodinville Whiskey Company turned 10 years old in 2020. If you are not familiar with the company, Woodinville is nestled in Washington State, about 10 miles away from Seattle. Thus far, it is one of the only distilleries in the midst of Pacific Northwest wine country and other farms. I’d recommend that you’d visit the area, it is quite beautiful.

But let’s talk whiskey. Woodinville has two primary award-winning offerings, a bourbon and a rye. However, there are also other fun options including a double barrel, toasted applewood finish and a port finished bourbon. In regards to process, the grain for the mash bills are locally sourced from the Omlin family farm in Quincy, Washington. The distilling is done in Woodinville, and then the barrels are thereafter shipped to Central Washington for aging in a private storage facility.

As distillers continually learn and explore, barrel finishes may help or hinder the qualities of the original product. Barrels with particularly strong flavor profiles tend to require a certain amount of finesse, in regards to the timing. For sure, there have been some overly wine influenced whiskeys, and other times when the barrel finish doesn’t show up to the party. 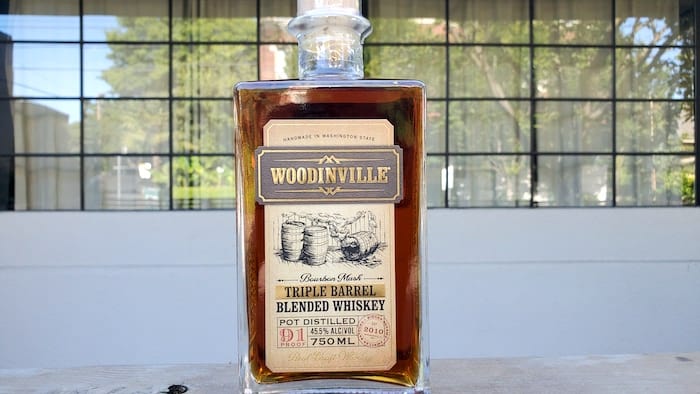 Appearance: A medium red or mahogany.

Nose: Immediately hit with a whiff of cherry candy. As per the Islay barrel finish, there is an element of smoke and peat in the background mixed with a rich toffee. Though it initially plays off as a richer whiskey, there’s also a brightness to the nose, probably from the fruit notes.

Palate: On that first sip, the flavors go with the smoke and leather first, but not all up in your face. The whiskey itself is surprisingly lighter bodied. There were some sweet notes of green apple and caramel, but what had been there faded quickly into the background. As the whiskey settled into a mellow finish, what remained were the peat elements mixed with hickory.

At first, this one tasted a bit middle of the road, but that may have been my curiosity about the triple barrel finishing. But that was the initial tasting. Took a break and decided to re-visit. Definitely picked up more depth in the experience the second time around. At the end of the day, I like this one, especially when the peat fades into the citrus elements. There's a moment when the flavors evolve and it's great, yet fleeting.