Editor’s Note: This whiskey was provided to us as a review sample by Westland. This in no way, per our editorial policies, influenced the final outcome of this review.

Terroir traditionally has been incidental in whiskey, rather than a fundamental force. To then seek out that factor and form the product around it waxes poetic. Which is what Westland is doing with their Outpost Range. These whiskeys are “an exploration of Pacific Northwest provenance” and feature various agricultural elements of this region.

The Colere series explores the base element of single malts: barley. Barley has also often been considered an incidental in whiskey, but Westland sees more to it than that. In true whiskey nerd fashion, I wanted to know more about this new project. Westland Master Distiller Matt Hofmann had plenty to say about this exciting line and the massive effort that went into it.

Colere joins Garryana in the Outpost range, with Solum to follow in 2023. Westland is essentially gifting this project to its drinkers, with Hofmann saying that consumers are “demanding that the whiskey industry break away from the relative sameness seen across the category and give them something new and meaningful.” Hofmann implies that the future of whiskey will mean as much and more, as new distilleries and new products uproot tradition and give us something radically different for the first time in a long time.

A lot of craft and innovation had to go into the Colere series. Breaking away from traditional barley usage presented a myriad of challenges to the distillers, according to Hofmann. Traditional AMBA barley is widely available and easy to use. It’s predictable and uniform and there’s a lot of experience in using it.

Then “all of that goes out the window when you go off-piste with a crazy six-row purple barley variety that malts 20% slower than the industry standard.” Every biological and technical step of this barley varietal had to be reimagined. From finding farmers to grow this crazy new barley to the people who malt and prepare it, to the distilling process itself, materials and systems had to be created anew. Hofmann credits these “partners” Westland has in this with making it possible at all.

Westland had to strive to make this happen; this barley didn’t just find them. They entirely funded the research of a Washington State University PhD student in the Bread Lab to create this varietal. The research included finding a breeder to get seed, then throwing in other varietals for plant health because “Mother Nature doesn’t quit.” All pollination and cross-breeding was done au naturel, by letting the barley self-pollinate – so no GMOs.

Sustainability and environmentally safe products are “core goals” of this program. They sought to create barley varietals that “thrived in low-input environmental systems.” Hofmann states that “to the best of my knowledge, our program with WSU’s Bread Lab is the only barley breeding research program globally with this as a baseline.”

This could improve the environmental impact of an already sustainable grain. By requiring the low-input agricultural systems in their research, they’re “creating a future for more sustainable barley for everyone.” This dedication to environmentalism carries through all of Westland’s products.

The future for Westland’s barley still has a lot to offer. Beyond developing the varietal, Hofmann plans to explore a “mind-boggling number of avenues” with it. He discussed differences in field and crop rotations as differences in flavor. Roasting this barley, like they do with their 5-malt, would present other flavor profiles as well.

This is really just the start of some great new things from Westland. The Outpost Range has a lot of potential to present new products in the whiskey industry, and Westland is jumping on all of them. Hofmann assured this in his final statement, saying “Don’t worry, there’s no shortage of cool projects in our future!” 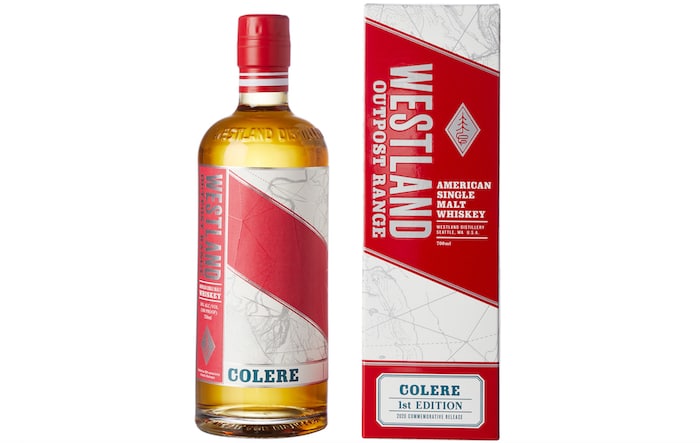 Nose: Deep and chocolatey at first, notes of dried blueberry follow. Sweet cereal, most reminiscent of Cap’n Crunch Crunchberries at the finish.

Palate: Fairly boozy at the top, then lightly sweet like cornflakes. Fruit and granola flow through the whole palate, changing form throughout. It starts jammy then freshens and sweetens into pineapple, with a bit of baking spice on the back palate. A touch of bitter almond and soap on the finish. Surprisingly warm, I added a touch of water to soften the overall taste, but it remains warm at the end.

If there was ever any confusion on the impact of the barley on the whiskey, this expression should clear that up. The light sweetness and winding complexity of this whiskey seems to be indicative of the grain rather than the barrel. This whiskey has more unique flavor after 49 months in the barrel than many that spend ten years in one. It is still infinitely approachable and drinkable. My hope is that this new foray into barley varietals will open up a range of options that need less age and thus can find higher availability and lower price points. We’ll have to wait and see, however, since the Outpost Range expressions remain in limited edition.