When I began this review, I had a question in my head: Why is Weller bourbon so popular? That sounds like I’m going to slam it. I’m not. It gets rave reviews and can serve as a good (and affordable! methadone to Pappy’s heroin. This Daily Beast article describes the differences. It can be hard to find, too. Maybe not as hard as Pappy, but still damn difficult.

W.L. Weller is a brand of wheated bourbon that is currently owned by the Sazerac Company (one of the largest distilling companies in the U.S.) and produced at the Buffalo Trace Distillery. Because it’s bourbon, it has at least 51% corn; because it’s Weller, the secondary grain is wheat.

Also in my search, I was reminded of the power of marketing. When it comes to alcohol, I think we’re all a little more…susceptible to the sweet siren call of a brand that we feel speaks to us. I came upon an article one of my fellow whiskey writers published back in 2016 that delved deeply into the actual history of William Larue Weller and Weller’s claim they’re the original wheated bourbon. In sum: No evidence exists that the man or his family ever distilled any whiskey.

What they did was sell whiskey. As a recitifer, that means Weller bought whiskey from distilleries; finished it through techniques such as blending, filtering and flavoring; packaged it for sale; and sold it to customers.

All of this is fine with me. I really don’t care about the hype. I mean, sometimes I think it’s funny, and you should see some of the crazy media and marketing kits we get, but really it all comes down to the quality of the whiskey that gets put out.

Like Weller’s latest: Weller Single Barrel. As we reported back in May, the new Weller Single Barrel bourbon, according to those behind it, will give Weller lovers a chance to enjoy this whiskey in a single barrel form. No two barrels will be quite the same. Weller aims to make this an annual, summer release.

But it’s not like bingeing on a TV show: Even if you’ve never had any variety of Weller, it’s ok. You can jump right in. We won’t judge. 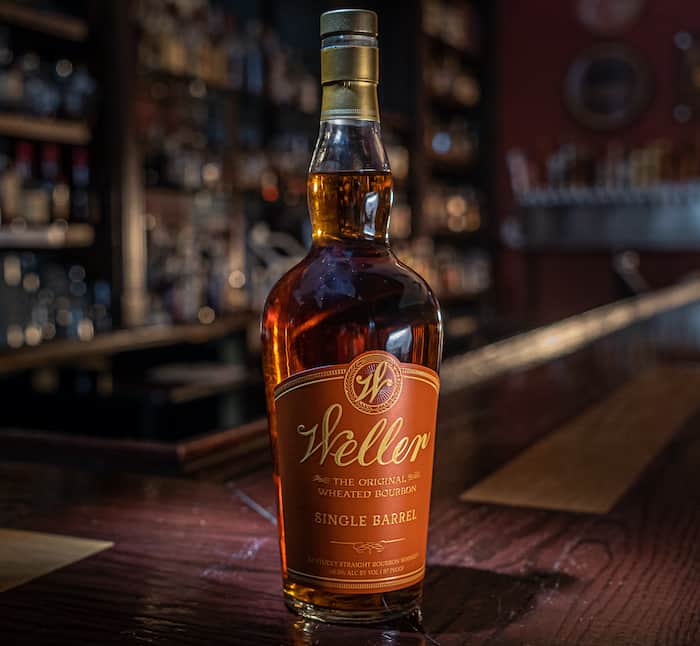 Appearance: A rosy copper. Shiny as a liquid can be without being viscous. More on the gold-to-green spectrum of copper than reddish-fire copper.

Nose: This is super-fragrant. It got me when I opened the bottle. I don’t mean that in a bad way. It’s enticing. In the glass, it is fragrant, like stumbling into that first cup of coffee. But it doesn’t smell like coffee, it smells like its rhyming twin, toffee. Vanilla, browned butter, a little bit like fresh paper pages of a new hardback book you’re dying to read. Also cherries, but mixed with creamy sweetness, like cherry vanilla ice cream.

Palate: I like this! It’s not as sweet on the palate as you’d expect. It is 97 proof and doesn’t pretend it isn’t (I find that refreshing). On the palate it’s less cherry vanilla ice cream and more…savory, almost? I get wintergreen on the front and a bit of fire on the back. You know what this is like? Have you ever had candied ginger, the non-sugar-coated one? And you eat a few pieces, and like, two are sweet but then you get that one super-potent, fiery one? Hat’s what this is.

This is one of those whiskeys I think would be great with food, in a cocktail or even on its own. The more I drink this the more I realize how drinkable it is. This might be dangerously drinkable. If you happen to taste this as one of several, I’d drink it before the others.

It’s not so hot that it’ll blow out your palate, but you’ll want to savor its nuances, so drink it first. It didn’t didn’t make me stop in my tracks but I thought it was swell and it was something I’d bring out for people I liked.