Well, Weller, Let’s Talk On Being The Original Wheated Bourbon

Editor’s Note: This column is republished from its original post with permission from its author.

Sazerac this week unveiled new packaging for the Weller bourbon line and doubled-down on the fictional claim that Weller is “The Original Wheated Bourbon,” which it debuted with the last packaging update a few years ago.

The distortion and misrepresentation gets even worse in the accompanying press release [PDF].

“Born in 1825, William Larue Weller was one of the early distilling pioneers in Kentucky. After serving with the Louisville Brigade in the 1840s, Weller returned to Louisville to join the family tradition of whiskey distilling.”

Weller’s company did not make whiskey, it sold whiskey. Weller was a rectifier. That means he bought whiskey from distilleries; finished it through techniques such as blending, filtering and flavoring; packaged it for sale; and sold it to customers. After 1871, the Weller company had a still, which they used to re-distill poor grade whiskey into neutral spirits which they called ‘cologne spirits.’ The company even issued a statement that it did no original distilling, just this redistillation. 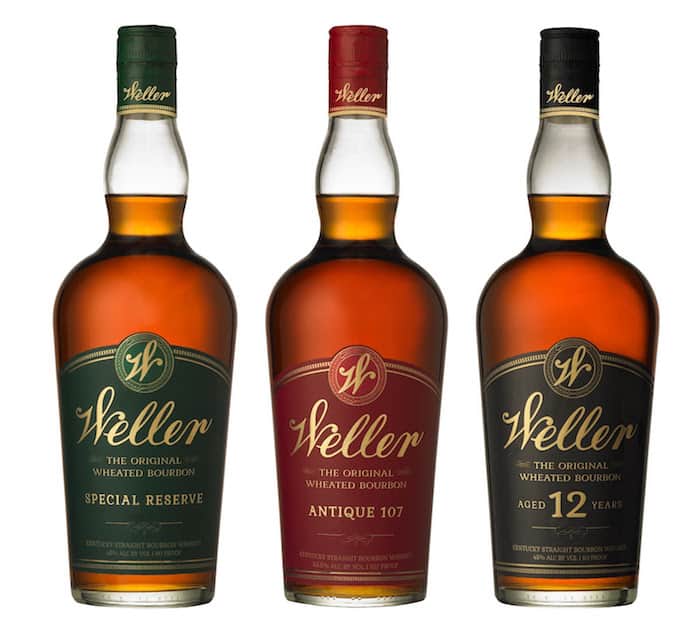 The press release continues with more fiction about Weller. “He developed his original bourbon recipe with wheat, rather than rye in the mash bill. Weller’s original wheated recipe bourbon became so popular he was forced to put a green thumbprint on barrels to ensure that customers were receiving the real deal.” Since Weller wasn’t distilling anything, he had no need for any recipes. The ‘green thumbprint’ is a new wrinkle and may have been a form of branding, which was just emerging at the time, but it merely would have identified Weller’s company as the product’s source. There is no reason to assume it indicated a wheated recipe.

“His namesake company eventually went on to merge with Pappy Van Winkle’s A. Ph. Stitzel Distillery to form the Stitzel-Weller Distillery, one of the most iconic and beloved distilleries in Kentucky.”

This may be the most distorted claim of the bunch. In 1893, ‘Pappy’ Van Winkle went to work for Weller as a whiskey salesman. When Weller retired in 1896, Pappy and another salesman, Alex Farnsley, bought his share and gained controlling interest in the company. When Prohibition came they obtained a medicinal whiskey license. Pappy also had an ownership interest in one of the Weller company’s primary suppliers, the A. Ph. Stitzel Distillery. In 1933, he merged the two companies to form Stitzel-Weller.

The source for most of this is And Always Fine Bourbon, Pappy Van Winkle and the Story of Old Fitzgerald, written by Pappy’s granddaughter, Sally Van Winkle Campbell, and published in 1999.

When Prohibition ended, Pappy built a new distillery and decided to make a wheated bourbon there. It was the only recipe that distillery made, which they sold as Old Fitzgerald, Old Weller, and several other brands. It is not recorded why they chose a wheated recipe, but the prevailing theory is that they believed a wheated bourbon would be palatable at a younger age, which was important in those early years when no one had very much aged whiskey.

Stitzel-Weller promoted its wheated recipe in advertising for both the Fitzgerald and Weller brands. (Yes, the ‘century-old secret’ claim was false then too.) Old Fitzgerald (now owned by Heaven Hill) was the company’s primary brand, but Weller was considered a premium bourbon too. The company’s other brands, all made from the same wheated recipe, were younger and cheaper.

Although recipes for wheated bourbon appear in some pre-Prohibition records, Stitzel-Weller was the first distillery to promote its wheated recipe. In earlier days, wheat was commonly substituted for rye in bourbon recipes based on availability, cost, and personal preference but rye was the dominant ‘flavor grain.’

No one ever claimed the ‘invention’ of wheated bourbon until Maker’s Mark came along. They, too, were indulging in fiction since their wheater followed Stitzel-Weller’s by at least 20 years. It may be that what Sazerac is really trying to say with this claim is that Weller was a wheater before Maker’s Mark. That is true.

As always, the problem for bourbon distilleries with these forays into fiction writing is that they diminish the real history of the people, companies, and brands. All of the major producers, and many of the small ones, are guilty of it in one way or another. Marketing will always be with us, but there is still such a thing as truth. Now you know Weller’s true story.

796
Shares
11.6k
Views
Share on FacebookShare on TwitterGet Our Newsletter
Get The Macallan® Rare Cask at ReserveBar. Shop now!