Editor’s Note: This whiskey was provided to us as a review sample by Boann Distillery. This in no way, per our editorial policies, influenced the final outcome of this review. It should also be noted that by clicking the buy link towards the bottom of this review our site receives a small referral payment which helps to support, but not influence, our editorial and other costs.

Boann Distillery are the people behind The Whistler line of whiskeys which began in 2015, and as such, are one of the new kids on the block in the realm of Irish whiskeys. This is not a bad thing. New distilleries are always popping up around the world. Everybody has to start somewhere.

“At Boann, we pride ourselves in being one of the most innovative whiskey distilleries in Ireland,” said Pat Cooney, founder of Boann Distillery, about his company. “We only use locally grown barley in our whiskeys and have access to the best casks to mature our spirit, ensuring that we produce unique whiskeys in which every bottle tells a story – the story of our land, our people and our family.”

Those behind the company are all about doing it right, especially when it comes to sustainability.  The water used in their production practices is sourced from their very own Boyne Valley well. As for the distillation, they use a closed loop water system in order to limit waste and re-use when possible. Just to show that they are serious, Boann is what’s described as Origin Green certified, which is Ireland’s pioneering food and drink sustainability program.

So, a bit about the whiskey itself. This particular selection from Boann is aged for five years in sherry butts hailing from the region of Jerez in Spain. In the area, there are several sherry producers within arms reach, whether you’re looking for something sweet or perhaps on the drier side.

However, the portfolio in the Whistler line doesn’t end there. The distillery has quite the line up of whiskeys. Their flagship Trilogy series includes a double oaked, honey infused, and an Irish cream. When it comes to wood finishes, there are other sherry expressions, as well as a Calvados and Imperial stout cask finish. 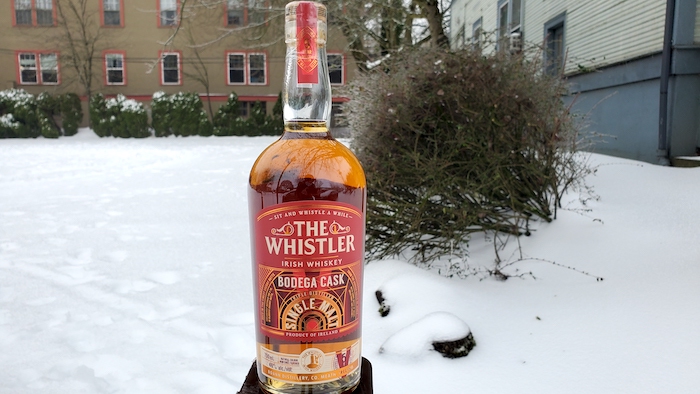 Appearance: A pale yellow, though depending on the angle of the glass, there’s a touch of orange. In the glass, legs were quick to appear and run down the sides.

Nose: The sherry influence is certainly pronounced on this one, with that familiar sweetness. However, the fruit notes are difficult to place. At first, there’s the brightness of some green apple, though the aromas of honeydew creep in after a moment.

Palate: Whoa, this one leans hard towards the sweetness. Honey plus a hint of milk chocolate, and then a kiss of funky with some notes of pine nuts. The whiskey is fairly viscous, so the finish does linger for a bit.

I'll admit that I really appreciate balance in a whiskey. It can be an easy sipper or something with a bit of attitude and higher proof. Sweet, spicy, caramel, honey, smoke, etc.

This one clearly misses the mark. I like generally like things with sherry finishes, but perhaps being in there for five years may have been a bit much. But that's just me. The Bodega Cask errs too much on the sweet side. Yes, there's are moments that highlight other elements, but there's no question as to what prevails on the palate.

That said, it's not my jam, but if you like your whiskeys heavily on the sweeter side, perhaps give this one a try.