Editor’s Note: This whiskey was provided to us as a review sample by Tarnished Truth Distilling Company. This in no way, per our editorial policies, influenced the final outcome of this review.

Distiller Justin Boyle and his team produce their Tarnished Truth Distilling Company spirits in Virginia Beach, Virginia. They bottle one of almost everything, as is common with small batch distilleries. Their operation is in the historic Cavalier Hotel: fabled playground of dignitaries and dilettantes for decades. You can still book a room and join their ranks, in fact. They’re the only American distillery housed in a working hotel.

Tarnished Truth High Rye Straight Bourbon Whiskey is a sourced spirit, finished and bottled by the company. Boyle samples barrels; assessing mouthfeel, aroma, taste, and finish. He’s looking for flavors of honey, clove, cinnamon, plum, and raisin. Typically, a blend will be of four to six barrels. “All the flavor compounds develop independently. We might find a barrel with high oak that we need to marry with a barrel that has more of the fruit notes.”

With a mash bill of 36% rye, this spirit is significantly higher in rye than most bourbons. Aging for three years in No. 4 char barrels brings it back to more familiar bourbon treatment. Distiller Boyle hints that the brand will diverge again to release a port cask finished high rye whiskey. 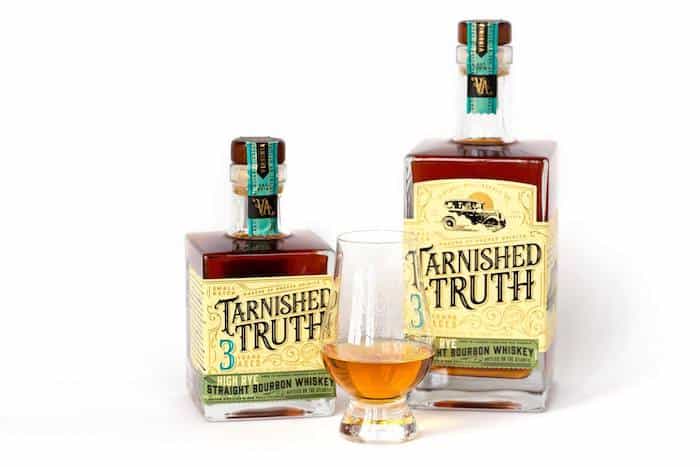 Palate: The palate is friendly, the heat mellow and quickly dissipating. This whiskey is slightly saline on the attack, with flavors of allspice, black pepper and, yes, plum. Sarsaparilla and sweet custard linger on the mid palate, with a second hit of warm spices on the back palate.

It’s what you would hope from the title: the dulcet tones of a bourbon with the spice of a rye. Smooth enough to enjoy on its own, and steely enough to stand up to other bold flavors in a cocktail.