When Manhattan Moonshine Company was formed in 2013, its founders were on a mission to make un-aged whiskey, or “moonshine,” that could rival aged competitors.

Since the 2014 debut of the company’s first and eponymous Manhattan Moonshine – which dispenses with corn in favor of oats, spelt, and rye – they have moved in a slightly more aged and pun-heavy direction of Sunshine Reserve.

While the original was intended to vindicate “moonshine” (check out our analysis on that term) from its popularly ill repute, the stated goal of Sunshine Reserve is to be equally “approachable” for novices and “exciting” for longtime whiskey lovers using a number of unconventional approaches, according to their website, which is details their intent if not the hard numbers.

Firstly, Sunshine starts with an unusual mash bill of primarily oats, with rye, spelt, and malted barley added in. The whiskey is then aged at a lower than usual proof – to make it sweeter – and aged in oak barrels baked in convection ovens, as opposed to charred, to shy away from burnt-wood flavors.

Finally, Sunshine Reserve is proudly, non chill filtered, which makes the whiskey a bit cloudy, but which also keeps in esters that add a floral, fruity flavor, according to the company.

The final product is 42.5% ABV and packaged in an interestingly Art Deco-like bottle, in an apparent homage to the sibling co-founders’ – Will and James Kehler – fascination with the Prohibition era.  The Chrysler Building-like bottle also has a glass-handled cork such that I might otherwise mistake an empty bottle as a decanter – and the company suggests using it as such when you’re done. 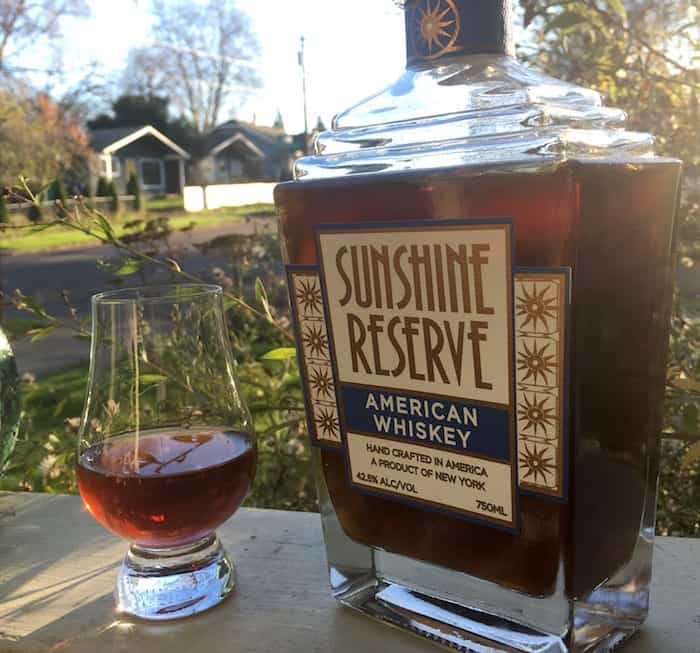 Vital stats: American whiskey with a mash bill of primarily oats along with spelt, rye and malted barley. Aged in convection-baked oak and non-chill filtered. Bottled at 42.5% ABV and sold for about $50 per 750mL bottle.

Appearance: In the glass (and bottle), the whiskey is much darker than most with a cloudy, reddish brown hue more skin to a red ale. I don’t usually pay heed to legs, but these also seem more viscous than normal.

Nose: The nose begins with an interestingly bittersweet scent. With an base of earthy but sweet oats and a touch of spicy rye, it initially takes on plum-like sweetness with a bit of the tartness of a tangerine and a hint of lilac. That combination mellows a bit into a black licorice with a note of oak.

Palate: It’s entry into the mouth comes off like a dried fig and raisin dipped in mild caramel –  rich and intensely sweet but still earthy and bit bitter. That comes with a light pear note with hints of indistinct flowers and spices. The spices become more apparent as the flavors of cinnamon and nutmeg manifest themselves and very, very slowly induce spicy tingles on the tongue and the corners of the mouth.

Swallowing strips the flavor down to that spicy tingle, which feels potent but not overwhelming, more like a chill than the sting of other whiskeys. That chill lingers in the mouth for the next few minutes with a gradually-fading, caramelly-fig residue through the mouth.

If Sunshine Reserve set out to make a whiskey that’s approachable for newcomers and a unique experience for whiskey aficionados, they certainly accomplished the goal. The sweet, dried fruit flavor isn’t my favorite, but that certainly keeps the spiciness in check and makes this one that a newcomer could enjoy neat, even if it's not a great reference point for those looking to learn more about whiskey.

Meanwhile, the unconventional approaches and flavors also made it an experience unlike any other whiskey I’ve tried, even if it's a sweet, almost dessert-like dram.