Legacy is the quest for validity that we all hunt for. At some point in our lives, we ask what we are here for and what we want to leave behind to leave our mark on this ever-changing world. Artists create, builders build, and distillers craft memorable flavors. Legacy also defines the idea of connecting with the past. With Michter’s American Whiskey, their legacy goes all the way back to 1753, when a Swiss Mennonite farmer, John Shenk, founded Shenk’s distillery, which was later renamed Bomberger’s Distillery in the 1800s before having its name changed once again to Michter’s Distillery in the mid-20th Century.

How better to honor Shenk’s legacy, than to have a whiskey released in his name that honors him.

Using legacy in labels are not a guaranteed home run. But many distributors and distillers will take the time and effort to dust one off, usually as a marketing ploy, or as a way to kick start a new label by giving the tasters a look into the flavor profile they are planning to roll out with their upcoming bottling. As long as the distiller is putting their best foot forward and taking the same, if not more care of their legacy bottling as they do with their regular releases then I have no problem with the higher price point and limited option for release.

Michter’s has been around a long time, and with their 2020 offering of Shenk’s Homestead, a Kentucky Sour Mash Whiskey, they aim to showcase adherence “to the traditional Sour Mash process whereby a portion of the previously distilled whiskey mash (referred to as ‘setback’) is added to the next batch.” Made with a substantial amount of rye, it follows up on the success of 2019’s Shenk’s release, where some Chinquapin (Quercus muehlenbergii) barrels (the wood of which has been naturally air dried and seasoned for at least 3 years) were utilized during maturation. This latest expression utilizes a greater percentage of whiskey aged in Chinquapin Oak in each batch.

When cracking the seal on Shenk’s Homestead, Kentucky Sour Mash Whiskey, I had no preconceptions to work on. And that is a fun place to start from when diving into a new whiskey. While tasting, I was able to dive deep into the intention behind the flavors and was treated to a wonderfully crafted whiskey that will please the palette of most any whiskey drinker. 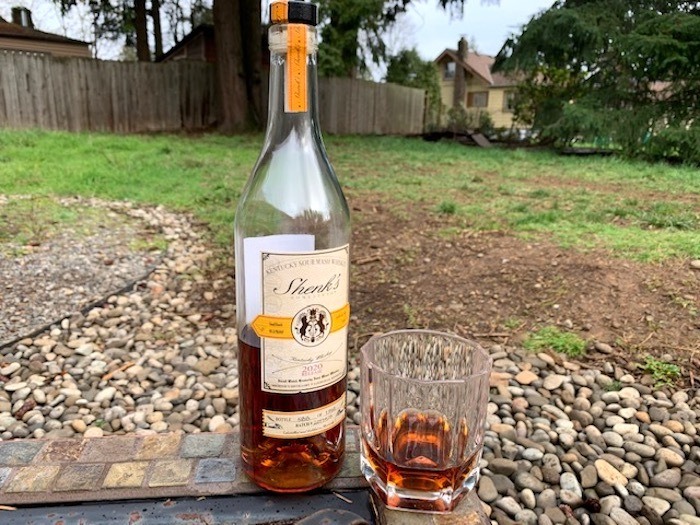 Vital Stats: A small batch of 1759 bottles have been released with a 45.6% ABV and price of around $80. It is made in Kentucky according to the traditional Sour Mash process, with a substantial amount of rye in the mash bill.

Nose: The front of the nose catches caramel and dried apricot. Further whiffs reveal vanilla, ripe pear, a hint of oak and a bit of clove.

Palate: Shank’s has a pleasant buttery front that is accompanied by a prickly heat that hangs on for just the right amount of time. Spicy notes of cinnamon, clove, nutmeg bring home a nostalgic fall flavor that is accented by the rich flavor of warm raisins. The back end has a welcome oak flavor that highlights the carefully aged barrels that were hand-picked for this distilling. The substantial amount of rye used in this distilling is what shapes the drier, earthier tone and keeps the sugars in check.

Like a cozy blanket on your tongue, this whiskey warms and comforts in all the right ways that you would expect from a well-balanced whiskey. It is a shame that this is not on the regular line up for the Michter’s label, but I am glad that dug deep when looking into what their legacy is built on.