Editor’s Note: This whiskey was provided to us as a review sample by Berkshire Mountain Distillers. This in no way, per our editorial policies, influenced the final outcome of this review. It should also be noted that by clicking the buy link towards the bottom of this review our site receives a small referral payment which helps to support, but not influence, our editorial and other costs.

In March, we reported about the Craft Brewers Whiskey Project, which has for the past five years brought together a select group of craft beer brewers across five states.

After five years of aging in oak barrels, Massachusetts-based Berkshire Mountain Distillers has released the first trio of whiskeys in partnership with three brewers in the Northeast: Samuel Adams, Jack’s Abby, and the aforementioned Berkshire.

Each of these whiskies is the product of a single-sourced craft brew distilled into a unique Berkshire Mountain Distillers whiskey, and each spend a month being sold only in Berkshire’s Massachusetts distillery before it gets distributed throughout the Northeast. Each is blended to 86 proof using Berkshire Mountain’s spring water and packaged in custom bottles with brewer-designed labels. 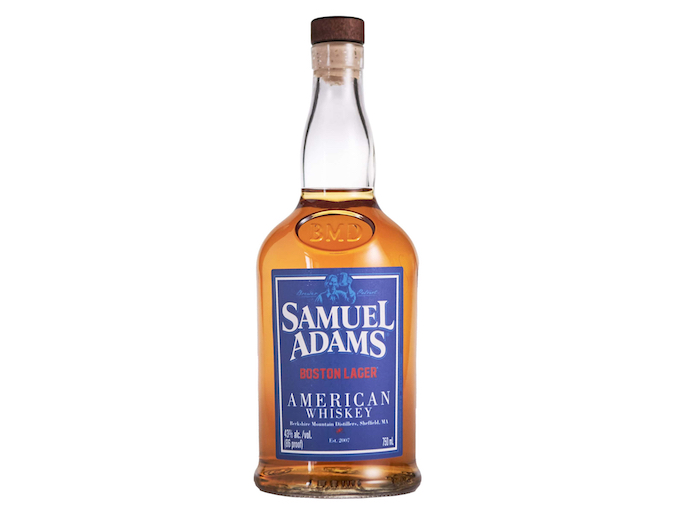 Nose: A strong and bold nose, for sure. I capped the sample-size bottle after pouring a small taste into a Glencairn glass and it was like the scent wafted across the table. That’s some serious scent. It smells like a raucous bar, actually, like the kind of bar you might go to in college. Not a dive bar, nor a place with sawdust on the floor. More like a bar a rung or two above that: A bar that fancies itself slightly higher-class, but still slaps a fluorescent wristband on you when your ID passes muster. Also: grape bubblegum.

Palate: Definitely an echo of beer in here. This whiskey tastes like you should eat it with those bar peanuts that you have to shell, the sort of dusty peanuts which show up at your wobbly bar table table in a small wooden bowl of dubious origin. It’s kinda of cool, being able to get beer flavor without drinking the beer. I still get that  gummy kind of mouth feel. It’s interesting. A fun collaboration. Yet I don’t feel like it’s a whiskey drinker’s whiskey. It’s a beer drinker’s whiskey. Which is fine, not every whiskey has to scream, “I am a whiskey!” (Right?)

I like this, in theory, and it’s a neat thing to do, but it’s not bowling me over. I think it’s just not my taste. It’s fine and maybe a good intro to whiskey for someone who is a bit nervous about peat and pretention.