The idea of making whiskey from beer brewed for five years, and now the juice is bottled and Berkshire Mountain Distillers is releasing a trio of whiskeys from their partnership with three Northeast brewers.

The Craft Brewers Whiskey Project is a five-year collaboration which includes the distilling of a dozen different popular beers from a limited group of craft beer brewers across five states. The project brought about the alchemy that gives us single-sourced craft brew distilled into a unique Berkshire Mountain Distillers whiskey.

“We were thrilled to collaborate with all of our brewer-partners and are excited these whiskeys are finally ready to be enjoyed by beer and whiskey aficionados alike,” said Chris Weld, founder of Berkshire Mountain Distillers. “This fun collaboration has been an exceptional project-in-the-making involving 12 brewers, 12 beers, 12 whiskeys and 80 barrels of spirits … we’re eager to release each one to the public.” 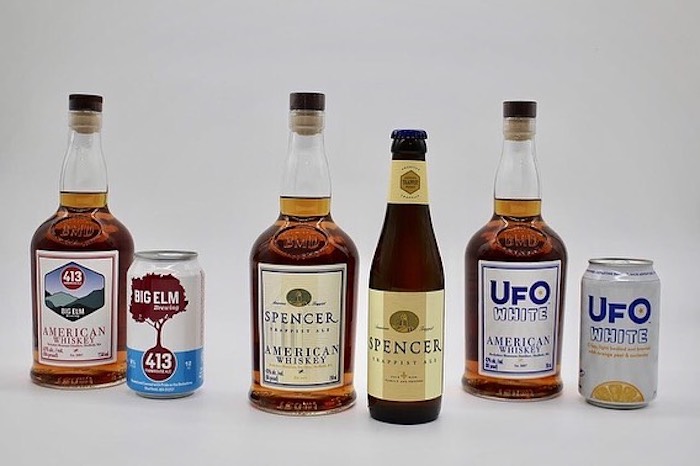 So what can we expect in the realm of taste from these new whiskey expressions?

Weld explained that the hops in the finished beer is the starting ingredient, and brings added interest to each of the whiskies in the Whiskey Project. Added spices and botanicals help bring through the genetics of the distilled beer into the final product (whiskey).

He elaborated on those tasting notes:

UFO American Whiskey is light, crisp and refreshing with notes of orange peel and coriander, plus a hint of vanilla from the virgin oak barrels in which it was distilled.

Spencer Trappist Ale American Whiskey is a full-bodied, golden-hued whiskey with fruity accents, and a strong butterscotch note on the nose.

Big Elm 413 American Whiskey has a fruity nose and a hint of whole-flower chamomile, orange zest and vanilla which adds a complex herbal and citrusy background. The 413 Farmhouse Ale was brewed with 100 percent local malt and hops from Berkshire terroir … malt from Turner Hill Farm in South Egremont, MA, and hops from Four Star Farm in Northfield, MA.

Inquiring minds want to know, just how does the process work of turning beer into whiskey?

Weld said that each beer was triple distilled and then blended with the distillery’s proprietary historic spring water before being aged in virgin oak barrels for five years.

“When you combine grain, water and yeast, it’s called wort and, once fermented, called wash or distillers’ beer. The process of making wash is very similar for beer or wash to be distilled into whiskey. Beer has hops, and sometimes botanicals and spices, added to it during fermentation versus a gin where the botanicals are added to an already-distilled spirit,” he noted.

Each whiskey is distilled from a finished beer that’s ready to drink. The spent grains from beer are essentially void of sugars and therefore have nothing in them to ferment and subsequently distill.

Weld chuckled, and said that it was tempting to tap into the beers Berkshire brought in to distill. “It’s a really geeky, fun science experiment … putting forth 12 whiskeys in the coming year, no two of which are alike. The batch we are releasing over the course of 2021 is five years old.”

In fact, whiskey is essentially beer’s older cousin … it’s taken more time to mature but comes from the same stock.

Dan Kenary, CEO of the Mass. Bay Brewing Company, said that when Berkshire Mountain Distillers came to the beer maker five years ago with the idea of this project, “we knew it’d be a fun way to collaborate with a local distiller to see what our beer could turn into … The resulting whiskey does not disappoint.”

Getting The Whiskey To Market

Each new release will spend a month being sold only in the Massachusetts distillery before it gets distributed in the Northeast.

“We hope to get people in to the distillery during that first month, allowing us to educate them about the project and make them aware of what we have to offer,” Weld said. “The whiskeys are available for pre-order (and pickup) on the Berkshire Mountain Distillers website, but we can’t ship whiskey across state lines due to Massachusetts law. There are some third-party sites that offer this service but, being a limited release, the Craft Brewers Whiskey Project whiskies will only be available in the Berkshire Mountain store and other retail outlets in states where the brewers originate.”

With its limited release, Weld said they are “just excited that we had a great group of partners. Some of the releases are extremely limited. Big Elm is a smaller batch because it is a smaller brewery and the resulting whiskey won’t end up being distributed. And 413 Farmhouse will only be available at the distillery for as long as it lasts. Big Elm was a natural partner because they are right down the road from our distillery and use local ingredients in their recipes. The logistics of shipping beer make it difficult to partner with brewers from too far away.”

The Future Of The Project

So is this a one-off experiment or will Berkshire continue the Whiskey Project annually?

Weld said these aren’t the first collaborations in the distiller’s history, and they are hard at work on new collaborations even as this batch is launching.

“We love working with craft brewers and the idea of collaboration is ongoing. In 2017, Berkshire Mountain Distillers released Two Lanterns and Shays’ Rebellion, both American whiskeys made with beers from The Boston Beer Co., which brews Samuel Adams. The whiskeys were aged over four years. In 2014, we released a limited-edition line of Berkshire Bourbon, aged in beer barrels from select craft brewers over a period of three to four months,” he said.

“We’ll keep trying to have another project come out on the tail of this one. Right now, we are acquiring more beer from Big Elm Brewing and are working with a new beer distillate, from a popular Eastern Massachusetts brewery, preparing for the distillation process this week,” Weld added.

While it might seem out of the box, Weld said that a distiller in this era, with new craft distillers popping up all over the place, “everyone likes to have something fun to talk about and something that keeps them relevant. This is a project where the synergy between a craft distiller and a craft brewery helps garner some interest in the market.”

Every bottle that Berkshire Mountain can sell allows the distiller to tell the story of the project, the beer, the brewer.

“It’s a great way to connect with craft brew fans and have them come in and learn about our products,” Weld said. “And yes, several outside-the-box projects are in the works … a couple centered around our homegrown herbs and botanicals.”