Editor’s Note: These whiskeys were provided to us as review samples by Noble Cut Distillery. This in no way, per our editorial policies, influenced the final outcome of this review.

Over 170 years ago, in 1849, Samuel Pike launched S.N. Pikes’s Magnolia out of Cincinnati and produced and distributed whiskey and bourbon all across the US and Europe. Pike was known as a “rectifier,” sourcing high quality spirits from Kentucky distilleries and blending them before distributing the perfected product. The business was successful enough to amass him a great fortune before S.N. Pike’s faded out of existence at the turn of the century.

This year the name and brand has been resurrected by retired real estate developer and bourbon fan Ed Carey, who has now taken up the title of rectifier and brought S.N. Pike’s Magnolia into the new world. Carey was inspired by Pike’s love of whiskey, but also appreciates the way in which Pike ran his business. Carey, like Pike before him, has a hand in the development of the spirits but does not directly distill them himself. “Our spirits are coming from a distillery in Lawrenceburg, Indiana, our bottles are coming from Pennsylvania, and labels are from Virginia,” Carey says. But while the process expands across the country, Carey guarantees top of the line spirits through scrupulous taste-testing during sourcing.

One more step in the new S.N. Pike’s Magnolia production includes Tony Guilfoy, co-owner and head distiller at Noble Cut Distillery. Based out of Gahanna, Ohio, Noble Cut proofs and bottles the final product, but not before Carey imports Kentucky spring water to use for proofing the spirits down. Carey insists this process “helps maintain, if not enhance, the taste.”

Today’s first tasting is of S.N. Pike’s Magnolia Wheated Bourbon, aged over three years in white American oak barrels and proofed with Kentucky spring water. The spirit is a blend of 45% wheat, 51% corn, and 4% malted barley.

The second tasting is of S.N. Pike’s Magnolia Bottled in bond rye whiskey, aged over four years also in white American oak barrels, and proofed with Kentucky spring water. The label has a classic feel, it’s sweet and old-fashioned, and while the brand is newer, the whiskies are both clean and pleasant. 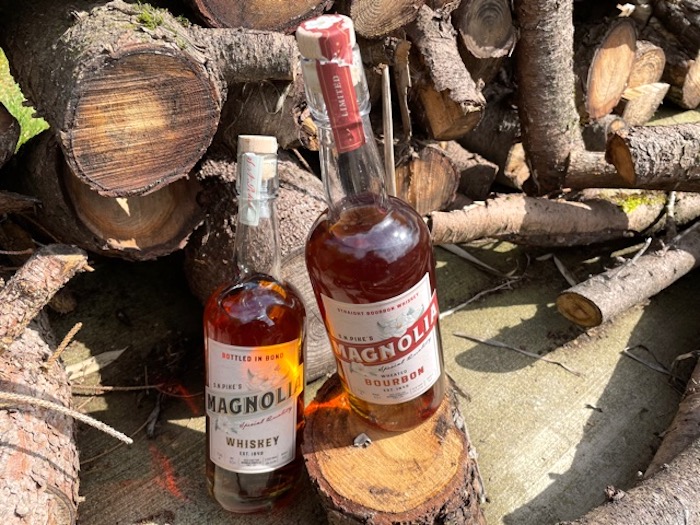 The whiskeys of S.N. Pikes’s Magnolia (image via Jerry Sampson)

Nose: The American oak of the barrel comes forward and melds well with a yeasty and floral sweet blossom scent.

Palate: Sweet but balanced, there is a fruity essence, jammy, with some bite but lacking bitterness. The whiskey is youthful, not too complex, with a nutty finish.

Final Thoughts: Thoroughly enjoyable if not a little forgettable. I am not as fond of a heavily wheated bourbon, but this goes down easy. The flavor profile is simple, which can be nice for a cool day when you are looking for a smooth sipper.

Appearance: The color of dark copper.

Nose: Subtle and estery, stone fruit and vanilla with floral notes, doesn’t give much more when it opens up.

Palate: The whiskey has an almost ephemeral quality; it starts out with a robust fruity note and then it’s swept easily off the palate. I got almond and even the smallest hint of the wood and barley. It is smooth, but I wanted more of an impact from one or both of these tastings.

Final Thoughts: To be honest, I added a few dashes of Aphrodite bitters to this rye and was struck with the complexity of flavors that the bitters opened up within the whiskey. On its own there is not much that makes it stand out, but it can be accentuated and elevated with a little help.