Whiskey Review Round Up: Wild Turkey

Editor’s Note: These whiskeys were provided to us as review samples by Wild Turkey. This in no way, per our editorial policies, influenced the final outcome of this review.

Wild Turkey has been in good hands since Jimmy Russell joined as Master Distiller in 1976. Together with his son, Eddie, Wild Turkey has been pumping out lots of new and exciting whiskies for its product line. Wild Turkey Longbranch, a collaboration between Hollywood actor Matthew McConaughey and the Russells, is a prime example of that in recent times.

While rules are meant to be broken, the whiskey world has a few limitations and standard rules, which seem to be broken more often than not in recent years. Wild Turkey Longbranch is one such bourbon that breaks the rules by using a mesquite charcoal filtering method. McConaughey summed up the collaboration, stating;

“Longbranch, in its simplest form, is an extended hand, inviting a friend into your family, so the branch that was extended to me from the Russells was a long one, one that reached from Kentucky to Texas and back again. I offered the Mesquite from my great state to add to their legendary Kentucky whiskey and together we made Longbranch.”

Eddie Russell continues as well to make his mark in his father’s footsteps. The third installment of the Master’s Keep series, Master’s Keep Revival, is a hit for bourbon fans. Eddie not only puts his own stamp on things, but he also loves paying tribute to his father and the history of Wild Turkey as well. Such care and thoughtfulness is evident in every drop.

As Wild Turkey produces higher end offerings, it still has plenty of expressions as well at more affordable pricing. Whereas the Master’s Keep Rival goes for about $150, both the Longbranch and Rare Breed go for about $40. Wild Turkey Rare Breed is, quite frankly, a steal.

While we have reviewed the Wild Turkey Longbranch, Rare Breed, and Master’s Keep Revival before, below is a new refresher of each of the whiskies. It is also quite interesting to taste them against one another as an exploration of the range this distillery has created beyond its basic 101 offerings. 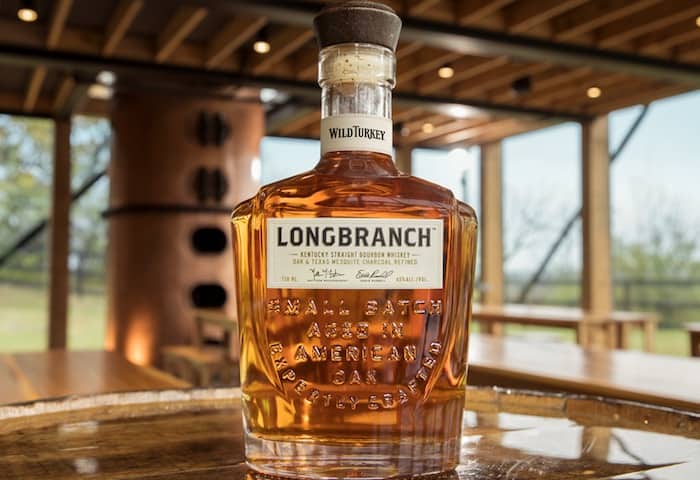 Nose: It is hot on the nose for an 86 proof, more so like acetone or lemon nail polish remover. The harshness then dissipates revealing cinnamon French toast. I also get something I am going to call, “Texan twang.” Maybe it is the mesquite charcoal, but it’s a strong southern musk.

Palate: The first thing I notice is the oak and a strange bitterness. Moving on, there is a lot of French vanilla and spiciness from nutmeg, allspice, and other baking spices. The mouthfeel is quite creamy. The profile is fruity with cherry and orange. Oddly enough, this is a great breakfast whiskey, as it tastes like syrup covered pancakes. I get a lot of star anise in the aftertaste, but it isn’t strong, just noticeable.

Final Thoughts: I had to taste the Longbranch on multiple separate occasions to make sure my palate wasn’t compromised, but I can’t get away from the bitterness I taste in the whiskey. It does disappear eventually, and once it does, the rest of the flavor profile is enjoyable. The Longbranch is approachable and easygoing.

Nose: Careful here; the nose comes off high octane more so than the actual proof suggests. Warm toffee and brown sugar provide the sweet notes. Black cherry stands out for the fruit notes, but there is also a tangy or sour note.

Palate: The mouthfeel is light and oily. The Rare Breed is warming and spicy with cinnamon, ginger, and allspice. Vanilla and almond extracts also permeates the bourbon. Pipe tobacco finishes the palate off.

Final Thoughts: For the price point, you cannot go wrong with the Rare Breed. This one just stands out amongst the others, and I think it’s a bottle that everyone should add to their home bar. The warming spice and flavor profile are very rich and will make you feel all nice and tingly. It’s nothing like Wild Turkey 101, and no one should turn their noses up at this expression.

Nose: It starts off pungently sweet with vanilla and cherry similar to cough syrup. Oak and acetone are very low key.

Palate: Despite the sweetness, there is a saltiness mixed with the cherry. Toasted nuts and coconut chips mix with raisin like a nice trail mix. Although the oak on the Master’s Keep Revival is minimal, the char is pronounced. The finish is grassy.

Final Thoughts: I think the Master’s Keep Revival could benefit from a higher proof, but it is still a nice whiskey. I was expecting something more. For rye lovers, I definitely recommend it, but for Oloroso sherry finished lovers like myself, it may not be whiskey you are looking for.