Editor’s Note: These whiskies were supplied to us as review samples by the party behind them. Our review here in no way is influenced by this – see our Editorial Standards policy for more details.

Eastside Distilling’s Burnside Bourbon has long been a favorite in its home state of Oregon, which tends to embrace locality to degrees which outperform most other drinking cultures. Eastside’s iconic Burnside bottle design, which once included a picture of General Ambrose Burnside, has taken its design in a new direction since Burnside wasn’t actually from Oregon.

We reported on this rebranding back in October, and the new, Burnside-free bottles have finally hit local store shelves. To replace the “dead white guy’s picture,” distiller Mel Heim, along with Sandstrom Partners, have created a set of new labels that instead emphasize the vibe of Portland, Oregon, including neighborhoods attached to the main thoroughfare, Burnside Street.

In addition to the commitment to keep their branding focused on the local, Eastside Distilling has doubled down on their commitment to finishing their whiskies in Quercus garryana, better known as Oregon oak. The company is committed to the sustainable harvest of these trees for use in their cooperage program, and the wood itself is unique in the world of spirit aging. According to Heim, the oak is “almost sponge like from the fast growing it does in Oregon winters.” This texture leads to intense oak flavor as well as higher levels of vanillin, the compound that strikes all the same taste and aroma notes as actual vanilla beans. The entire rebranded line of Burnside whiskies proudly brag of this specialized finishing front and center on each bottle.

Despite a new face and lots of effort to transform the label in to something that feels like a concert poster for the next Modest Mouse show, the Burnside line of whiskies has years of fandom behind it, and the ultimate test always comes down to the liquid in the glass. Can Garryana carry Eastside’s Bourbon, whiskey, and rye further in to the spotlight? 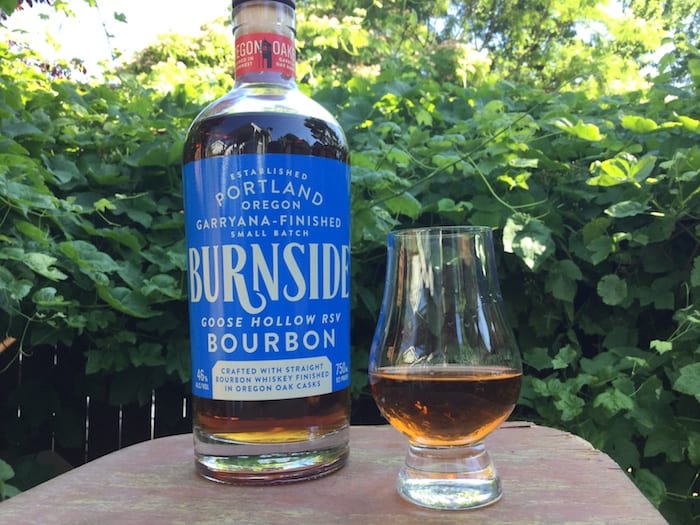 The lightest of the bunch pours a flat, dull, and flabby straw hue. Legs are present, thinly, but much of the whiskey beads up on the glass’ interior. The aroma is pleasant enough, prominently showcasing a grassy, dusty oak scent with notes of white grape, apricot, and a touch of not-overwhelming vanilla.

This whiskey hits the palate in a very crowd pleasing way. Enough viscosity that it doesn’t just slide quickly across the tongue, but not hot enough or thick enough to prohibit faster sipping. For such a light whiskey, a robust oak character exists, deep enough to transcend in to the world of baking chocolate, toffee, and candied orange peel. The liquid itself is an inoffensive blank canvas of sorts, seemingly blended for ease and drinkability. Could happily sip on this mindlessly, and would also feel fine mixing it with some tasty ginger beer. While not the most interesting, surely a success in balance.

This pour has a little but more gold to its body, and the legs on this pour are a little more resilient and viscous. The brightness is also turned up a bit with this rye, and the liquid in the glass practically glows. Aromawise, there is clearly more sweetness on first inhale. Notes of melted popsicle, backed up by some citrus oil and a balancing touch of basement must make for a really interesting first impression. Deeper inhales start to promise some heat on the palate.

In a seemingly reverse deception from the first bottle, this one smells complex but then falls quite flat in the flavor arena. The liquid glides almost effortlessly across the tongue, and leaves all of its flavor in the finish. A one-dimensional cocoa/oak combo creeps up from the esophagus after each swallow. Swishing creates a brief tanginess that sparks some interest, but the alcohol heat beats the ability to garner nuance from this simplistic beverage. I’ll be mixing the rest of this one.

And the first sip is a winner. Fresh baked bread, orange chocolate, vanilla caramel, and a soft-yet-bitter oak presence round out a superb sipper. There is a reason why this whiskey has become a staple on bartenders’ shelves all throughout the Portland area. Drinkability is there blanketed by a complexity that can be appreciated without interference. Very rarely do I wish for MORE HEAT to perfectly round out a Bourbon, but this may be the one time I’d like to see that.

This is the reserve, unblended version of the popular Eastside Bourbon. It pours the darkest of the four, a deep amber with hues touching the purple and red spectrum, oddly but beautifully. Clarity and brightness are good, but this beverage also suffers from weak legs and quick, runny beading. The first thing noticed in the aroma is something quite solventy, which masks many of the other detectable scents. Deep inhales can source some hints of blackberry jam, spent coffee grounds, and the most prominent back note of leather and vanilla.

The flavors of this whiskey, however, are on point. The texture and mouthfeel is the first thing noticed, it’s thick and viscous and almost marshmallowy over the palate. This abates the booze’s heat, and allows for so many undiscovered flavors to emerge. This one relies less on the fruitiness of grain and is more a story direct from the wood. Tastes of glazed donuts are present, as well as almond butter, snickerdoodles, and a pleasant toasted wheat bread finish that pairs perfectly with the minuscule presence of heat that activates with each gulp.

While Eastside has been playing with garryana for some time now, this rebrand provides the perfect excuse to take some time and revisit a classic Oregon line of spirits that has certainly benefitted from repetition and experience. While the Rye is mostly forgettable, any Oregonian worth their salt should have at least one of these bottles at home to indulge in both a fine tipple and a bit of local pride. My suggestion would be to go for the old classic, straight up Burnside Bourbon.