Editor’s Note: This whiskey was provided to us as a review sample by Deutsch Family Spirits. This in no way, per our editorial policies, influenced the final outcome of this review. It should also be noted that by clicking the buy link towards the bottom of this review our site receives a small referral payment which helps to support, but not influence, our editorial and other costs.

“Seek the truth, find redemption” are words used by Redemption Whiskey. But what is the truth and why does it need to be redeemed?

Well, it seems that the truth is the rye itself. Redemption products mainly center around being “high rye,” including a higher than average amount of rye in the mash bill. This barrel proof rye bottle is more so, being 95% rye (the remaining 5% is malted barley, used to aid in the fermentation process).

True to its history, Redemption redeems the American ryes of old with the high rye mash bills. The earliest American whiskey, the original “red” ryes were nearly 100% rye, with wheat and corn being added in later in time when the flavor element was considered. Barrel aging was added when it was noted how much the flavor improved, and also what created that red color.

There are still some differences between Redemption and the originals though. Rye originated with the Pennsylvania Dutch using the grain they were familiar with, and mainly in Pennsylvania and Maryland. Redemption sources from Indiana distilling giant MGP, and then batches and barrels it in Bardstown Kentucky at Bardstown Barrel Selections. It is currently owned by Deutsch Family Spirits.

This rye is a bit of a banger. Redemption has been able to achieve strong flavors by really pushing that rye percentage, and most of their bottles spend less time in the barrel for it. This rye maintains that mash bill, but adds over seven years to the aging process. The increased ABV makes for a flavorful whiskey that’s also hot and spicy.

The redemption seems to be earned on this one. Redemption Barrel Proof rye earned 97 points in the Ultimate Spirits Challenge and has been named a finalist for 2020. 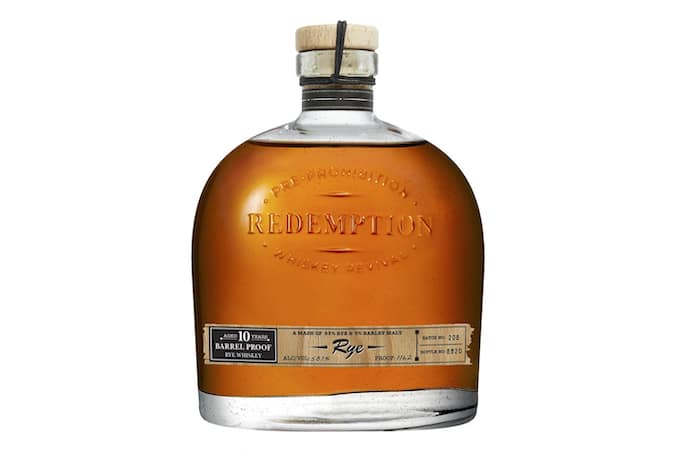 Appearance: Like soft caramel, very gold where the light shines through.

Nose: Fresh herb pops up here briefly, then moves into a punch of green apple. The finish is more reminiscent of an apple cider.

Palate: Quite thick in texture, most of this whiskey is pure spice. The peak taste is hot, but not as warm coming up or down. Dark chocolate meets that same apple from the nose on the back palate, then finishes in dark roasted coffee. Finish doesn’t linger flavor-wise, but somehow the darkness of it does.

All the rye tastes are here - herbal, grassy, and sweet - and all of them represented at their best. The extra aging on this bottle was done to great effect, and the flavor increase from the barrel proof is undeniable. The higher ABV here is actually extremely drinkable, and despite my own affinity for drinking barrel proof whiskey neat, I think it would appeal to most people that way.