Perhaps the most relevant word on the Old Overholt label is “old.” At least, Beam Suntory sees  it that way. Beam lumps it with Old Grand-Dad and Old Crow – “The Olds” – whiskeys that have a long  American history. Old Overholt, particularly, is considered among the oldest continuous whiskey brands in the country. It has made it through wars, prohibition and whiskey busts. It also has roots in the tradition of “Old Monongahela” rye whiskey.

The German settlers who became the Pennsylvania Dutch brought rye with them when they arrived in Pennsylvania. They had experience making schnapps with the grain, but not yet whiskey. What they made once they were here, however, was the origin of whiskey in America.

The Monongahela river and surrounding valley provided the perfect climate for rye to thrive, as  well as an excellent water source. The rye whiskey that was produced at this point was fuller bodied and higher in rye content than what we’re seeing today, eventually incorporating some barley and sometimes a bit of corn.

The settlers who distilled and drank the whiskey back then called it “red whiskey” due to the  color imparted from barrel aging. Like other early whiskey production, the use of barrels went  from purely practical to part of the craft once distillers discovered the taste difference between aged and unaged spirit.

Something we’re still seeing today in common with Old Monongahela is the hybrid stills they used. Scotch uses copper pot stills; bourbon tends to use columns. Monongahela used a three chamber still that incorporated both, which was more efficient while also making the spirit heavier. Modern craft distilleries have made great use of this style as well, often crafting their own unique stills to exactly their desired style.

This doesn’t reflect on the current style and profile of modern rye whiskey, including Old Overholt. The distillery survived prohibition by selling their products as medicine, and WWII by creating war products. They even survived a whiskey bust in the 80s that took out many distilleries around the world. Today they make their whiskey in Kentucky, with Kentucky materials. The mash bill contains a higher percentage of corn, though it remains within the straight rye qualification of a minimum 51% rye.

Despite the move and shifts in style, Old Overholt has not lost the ties to its origin. Beam Suntory has recently arrived at a partnership with West Overton, the origin of Old Overholt distillery. This partnership includes financial contributions on the part of Beam Suntory for various needs, including museum restoration. A member of Beam’s brand direction will also join the West Overton Museum Board. The partnership is leading to new historically-inspired releases as Beam-Suntory is able to discover relics from Old Overholt’s original distillery. The Old Overholt 114 proof is part of that, as a throwback to the higher ABV ryes that were bottled at this proof.

In the battle for new vs. old, Old Overholt is combining the two concepts beautifully. It is an old distillery making a newer style of product, exemplifying the adaptability that distilleries need to stay relevant or even just stay afloat. New discoveries into the history of the brand are creating new products that honor the old, and it doesn’t seem like these recent expressions are anywhere near the end of it. This battle is not so much a versus as a win-win, in my book. 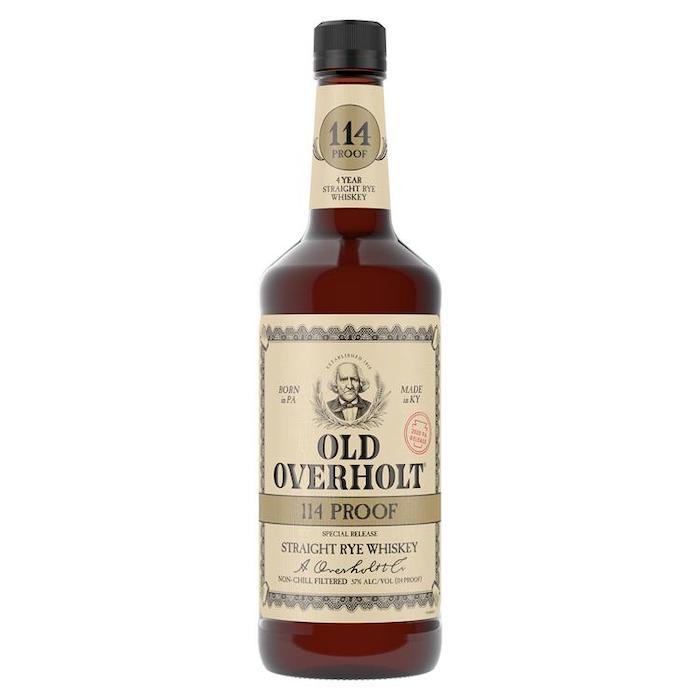 Nose: Starts grassy, but fills out and sweetens into cereal grains

Palate: It starts with a lot of grass and hay, spicy and sweet, then the spice takes over. The spice leads into a more bitter grassiness, with a long finish.

I’ve always found Old Overholt to be more on the rye side of rye; that is to say grassy tending on a bit bitter. And boy is this expression no exception, but packs in more flavor. The spice on this was SPICY, and since I’m not a 19th century farmer I added some water to mine. The water really opened up the cereal grains in this, letting the sweetness linger. I liked the intensity of this, and I’m excited to see the new things sure to come out of Old Overholt.

4
User Rating 3.06 (17 votes)
Sending
78
Shares
8.8k
Views
Share on FacebookShare on TwitterGet Our Newsletter
Cheers to the Dads! Personalize a bottle of his favorite whiskey to create a modern gift for the modern man. Use code: FATHERSDAY20 for $20 off your next order of $100 or more at ReserveBar