Editor’s Note: This whiskey was provided to us as a review sample by Brown-Forman. This in no way, per our editorial policies, influenced the final outcome of this review. It should also be noted that by clicking the buy link towards the bottom of this review our site receives a small referral payment which helps to support, but not influence, our editorial and other costs.

Old Forester has a long tradition as one of the standout names in American whiskey and bourbon reaching back to 1870 when Gavin Brown, a former pharmaceuticals salesman, bottled his first barrels of bourbon. As an homage, Brown Forman master distiller Chris Morris has teamed up with master taster, Jackie Zykan to craft the Old Forester 150th Anniversary Bourbon.

My sample, taken from batch 3 of 3 of the anniversary distillation, allows for the flavors of the past to mingle with the innovations that have come since. I have gone on at length in other reviews about my appreciation for tradition and the discipline shaped from building off of the crafting process. In this case, I believe the past processes and recipes that built the Old Forester brand might have been better off left in the safe, while instead taking the time to craft a more unique, and nuanced bourbon with an eye on where the company wants to go vs. where they came from.

I did appreciate the attention and detail spent on crafting these 150-year anniversary batches, in that they consist “of 150 barrels chosen specially by Chris, made from wood seasoned 150 days. Jackie then personally tasted and batched all 150 barrels into three very distinct flavor profiles and proof points showcasing the taste variations among barrels depending on where they rest in the Old Forester barrelhouses.” These details are fun and show the dedication to putting forth an interesting product, but I wish it hit more of the marks that I look for in a fine sipper. 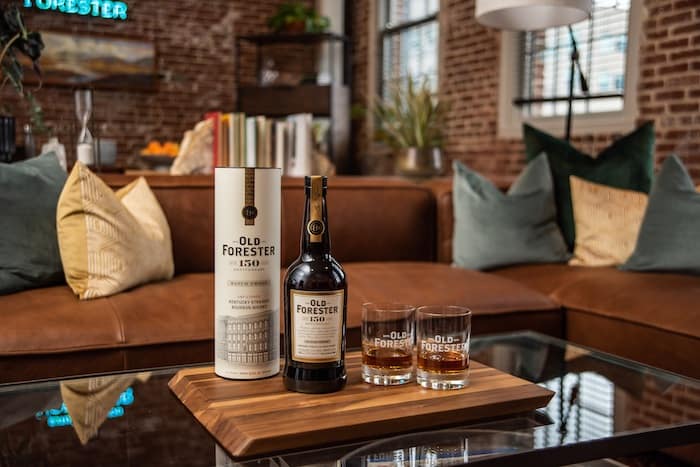 Vital Stats: Bottled at 126.8 proof, this unfiltered bourbon was pulled from the third of three batches. Priced at around $150 per 750 ml bottle.

Appearance: The color in the glass is of rich maple syrup with a viscosity that coats evenly as you swirl.

Nose: There is a sour note that might take you by surprise with its briny nature. Once that settles into the nose you will pick up some butterscotch, raisin and the more traditional vanilla and oak characteristics as well.

Palate: The bourbon hits the tongue with a bright front and a bit of a medicinal twang for the first few sips. The sweetness is reminiscent of light brown sugar until the flavor of butterscotch pudding jumps in. The heat hits after a second and is a bit sharp but does not hold on too long. The sweeter notes take center stage moving forward.

With ice, it smooths out a bit but still has the medicinal aftertaste and has a bit of white bread flavor on the end.

The Old Forester diehards will probably dig into this anniversary edition with optimism and intrigue at sampling the past that helped to shape this brand into what it is today. My palate was not blown away by the medicinal notes and sour aftertaste. Not every family legacy can charm the cold heart of a pessimistic critic, and this whisky is my shining example of that.