Editor’s Note: This whiskey was provided to us as a review sample by Brown Water Spirits. This in no way, per our editorial policies, influenced the final outcome of this review. It should also be noted that by clicking the buy link towards the bottom of this review our site receives a small referral payment which helps to support, but not influence, our editorial and other costs.

Hank Ingram, the proprietor of this delicious whiskey, describes the process as “using the cadence and unique climate of the river, bringing innovation to the whiskey making process, specifically the aging process.”

The distinctive flavor profile of O.H. Ingram River Aged is said to be built by the continuous rocking of the river, causing the distillate to interact with the wood of the barrel, accentuating the flavor profile.

Whiskeys aged in regular rickhouses will benefit from the climate of the area in which they are stored as well as the location of the barrels. On a floating rickhouse, the spirits move constantly, enriching the whiskey with the vanilla and cinnamon essence that stands out upon tasting.

O.H. Ingram River Aged was financed by Nashville-based startup Brown Water Spirits, who also patented the floating rickhouse. While it may be a concept never before explored in quite this way, Hank Ingram is confident in the value of the process and this “new wave of whiskey” that harnesses the power of the river.

While this is a lower proof whiskey, there remains a nice palate-warming spice that really accentuates the high percentage of rye in the spirit. It is this note that makes my head cock a bit, because this blend leans so heavily on the rye that the bourbon does get a little lost.

Despite that fact, everything about this whiskey is confident. The sweetness isn’t cloying, the heat isn’t burning, and I feel like it easily matches up with some longer-aged whiskeys.

This is the first in the series, and I predict O.H. Ingram River Aged will build a stable reputation as they continue with this innovative process. 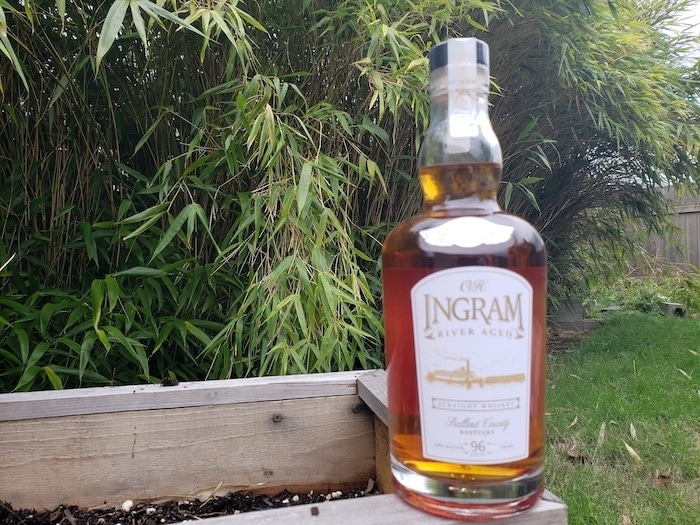 Nose: Right off I got the strong scent of baking spices, predominantly cinnamon. The throat-soothing allure of honey and meringue with a bit of acid from an orange peel.

Palate: Buttery mouthfeel, tastes kind of rummy, may be the way the sugar shows up. The slow build heat mellows into a smooth taste with distinct spice.

This is one of my favorite tastings. I’ve worked through other, more expensive straight whiskeys with less enjoyable outcomes and I would put O.H. Ingram River Aged near the top of my list for the year. I am excited to try the next iteration of the brand and eagerly look forward to watching as this family business rises in the industry.