From grain to glass, field to flask – there’s something to be said for distillers honing their craft to the degree that they’re involved in every step of the production process and using ingredients and materials that are locally sourced whenever possible. New Basin Distilling Company in the small town of Madras, Oregon, is committed to this very notion, and makes its process known with text stamped on bottle labels: “We grow it. We mash it. We distill it. We drink it.”

New Basin received its distillery license in 2014 and formally opened its doors in 2016, founded by five Oregonians with a mix of professional backgrounds (farming, cattle ranching, education, piloting, craftsmanship), and a shared entrepreneurial drive and expressed desire to make better spirits than those they otherwise enjoyed. Production has included vodka, gin and whiskey.

Operating partner Rick Molitor shared with me that he stepped away from his previous career as a superintendent of schools to turn to whiskey full-time – and it was his resigning from said “executive lifestyle” that inspired the name of its Resignation Rye Whiskey, which launched in June 2017, coinciding with his formal career change.

Interestingly, New Basin is not only a distillery but also technically a farm — it has 400 acres on which it grows grain. 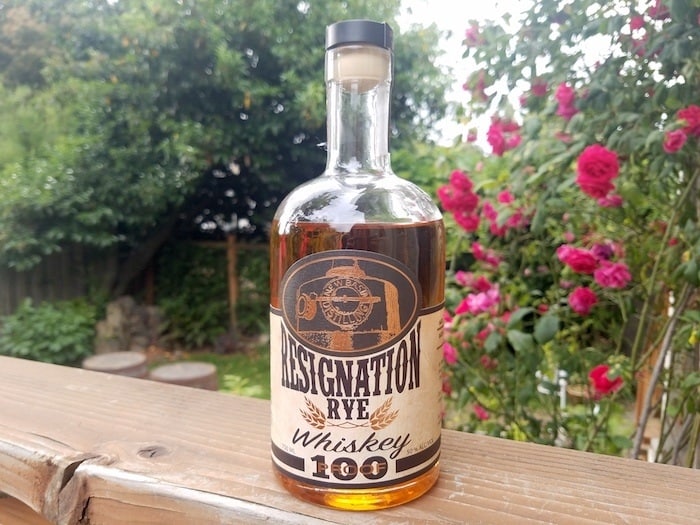 Vital Stats: 100% Oregon Certified rye grown by the distillery makes up 100% of the mash, which is furthered along with citric acid for pH and enzymes that aid in the conversion process. It’s aged for 3-4 months (my bottle noted 3 ½ months) in micro-barrels of new American oak with a medium-heavy char and cut with water sourced from the nearby Opal Springs to be bottled at 100 proof (“what all rye should command,” according to Molitor). A 750 mL retails for $36.50. The bottle I sampled was #136 from batch #3.

Appearance: Amber in the bottle, blonder when poured.

Nose: There are sweeter notes of cherry cordial, fermented fruit and grain, and a rounder butterscotch richness – almost like that of a scented candle.

Palate: This rye starts out a bit neutral, and then a straightforward peppery spice is revealed and builds. Char is noticeable in the aftertaste as well as a vague sense of plastic, which dissipates quickly.

Resignation Rye Whiskey tastes and feels young, which is to be expected. Given the rye’s youth, so to speak, it might work better in a cocktail where it needn't be the star of the show. I wanted to love it, as I really appreciate the straightforward and hyper-local approach that New Basin seems to be honed in on, and I give the distillery a lot of credit for the passion and care that goes into its production. I’ll be curious to see what happens as time goes on, and whether it’ll produce a longer aged rye.