Not being a huge fan of bourbon, my trepidation is noticeable when one is put in front of me with the expectancy of praise for putting forth a good effort. Pleasantly, I was given the opportunity to partake tasting of Knob Creek Kentucky Straight Bourbon Whiskey. This drink was a test of my will to dislike America’s branded whiskey, bourbon, and provided an excellent reminder that one should never judge a book by its cover.

Jim Beam is known, much like Jack Daniel’s, for being one of the largest producers of accessible whiskey in the vast landscape of distillers throughout the United States. Since the first bottle of whiskey was produced by Jacob Beam way back when, investment in this brand has expanded into a thriving whiskey empire that caters to palates across the globe and includes the Suntory label as part of a merger a number of years back.

In the early 1990s, the Jim Beam company began to branch out further with the establishment of their small batch brands. Upon its initial previews, the Knob Creek label for Straight Bourbon outsold the initial estimate of 2000 bottles they were planning on offering of their 9-year aged small batch bourbon. Since then, Knob Creek has managed to establish itself as a well-respected mid- to upper-level option in the bourbon arena.

The sample provided for my tasting was the Knob Creek Kentucky Straight Bourbon. These days the label no longer carries the age stamp from the original batches. What it does carry is a wonderful nose, pallet and color that will transport the taster to a nostalgic wonderland of spice laden flavors that are soft, but not subtle and warm without being bitingly hot. 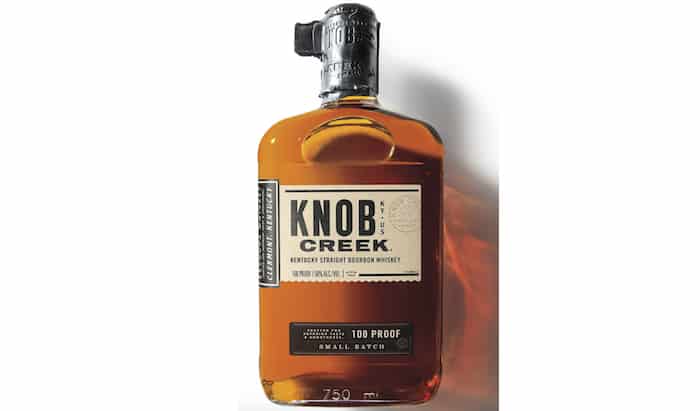 Appearance: Medium amber with an inviting viscosity on the glass

Nose: The most prominent scent upon the first smell was brown sugar. There is also the note of vanilla and fall spices that accompany the initial aroma.

Palate: Baking spices such as clove, nutmeg, black pepper, and brown sugar. Hint of vanilla without being cloyingly sweet. Gentle flavor of oak wraps around the other flavors as they are delivered to your pallet. Reminiscent of the dark outer crust from grandma’s banana bread with just a dash of cinnamon. Roasted apples chase the rest of the flavors down to provide a soft fruitiness.

There is a gentle heat that accompanies the drink, but it is not biting and does not linger longer than is appreciated.. Over ice, the bourbon takes on the character of spiced cider with a bit less heat than straight, further notes of clove, cinnamon, and orange peel dance around the apple character

Without pouring on too much praise, I can say that I truly enjoyed my visit with Knob Creek. Its nose and taste are inviting, and I have found myself gravitating towards Knob Creek when at bars when my usual preferences are not available. I also appreciate such a pleasant drink being available for under $40 a bottle. That puts this quite high on my list of likely candidates for stocking my liquor cabinet.