Before doing research for this review, I didn’t quite know the depth of the Jack Daniel’s portfolio. Of course, you have the classic No. 7, as well as the Gentleman Jack, Single Barrel being largely the flagship whiskeys. And then of course, the flavored selections consisting of a honey and a cinnamon “fire”.

In addition to such, there’s the limited editions, of which there have been many over the years. The subject of this review of course, being the Tennessee Taster’s Selections, with the Jamaican Allspice finish being the sixth in the series. Previous expressions have been a barrel strength rye, red wine, oatmeal stout, hickory stave, and angel’s share releases. Each of the Tennessee Taster’s are currently sold in 375ml bottles at a retail price of $40 per and only in Tennessee.

The series began with releases in 2018 and is designed to to showcase the Jack Daniel’s way for more experimental whiskeys that will undergo its own process for unique flavors. For this particular offering the brand took its Old No. 7 Tennessee Whiskey and finished it for 180 days with toasted Jamaican allspice wood, aiming to “create a nose of fruit, smoke, and sweet tobacco.” 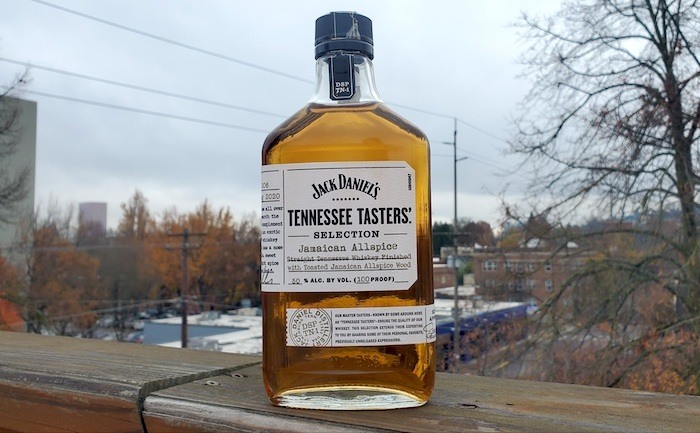 Vital Stats: 100 proof, 50% ABV. Jack Daniel’s No. 7, finished in Jamaican allspice wood for 180 days and is the sixth in the Taster’s Selection Series. Available in Tennessee at $40 per 375ml bottle.

Appearance: With the wood finish, I would have thought that the whiskey would have had more color. However, this one presents with hues of a lighter amber or a pale orange. In the glass, found some spaced, but slower legs.

Nose: The first whiff was loaded with notes of flamed orange peel and white pepper, with a medium heat. There wasn’t much else to the nose, save for perhaps a hint of breakfast tea elements in the background.

Palate: This was a really balanced whiskey. I was expecting it to be heavier, but alas, more medium bodied, which I appreciated. Much akin to the nose, there’s the pepper element intermixed with honey and orange spice tea.

Over the years, I've had a variety of experiences with Jack Daniel's. But then again, a lot of us have. Be it that first Jack and Coke at the ripe age of 21, liquor store samplings, or service industry tasting seminars. As with many brands, some selections are better than others, and that's the name of the game.

I was pleased with this one. The balance of fruit, spice, and a little extra flavor at 100 proof was spot on. For the price point, I'd say the quality is worth it. If you are a collector of whiskies, I would recommend buying two of these, cause sometimes a 375ml bottle can go pretty quickly and that way you can stow away the other on the shelf.