Editor’s Note: This whiskey was provided to us as a review sample by Hillrock. This in no way, per our editorial policies, influenced the final outcome of this review.

It’s rare to find a distillery that does everything on-site, from scratch. It’s an extremely difficult endeavor to accomplish, considering all of the labor it takes to produce grains, mill, malt, store them, and then take all that hard work and magically turn it into whiskey, which then needs to be aged and stored, etc. It’s an ambitious undertaking, to say the least. A few have mastered the “farm to glass” whiskies, including Hillrock Estate, which grows, mills, distills and ages all of their rye entirely on their estate in Hudson Valley, New York.

In the 1800s, New York produced more than half of the growing nation’s barley and rye. As a result of prohibition, over 1000 farms fell by the wayside, pretty much eliminating whiskey production in the area for many years. Hillrock’s uniquely hand-crafted approach seeks to highlight the terroir of the region once more and to honor the whiskey producers from the past. In fact, their estate sits on several acres that used to belong to a grain salesman and Revolutionary War captain, who built the Georgian-style house on the property in 1806.

Hillrock Estate’s Double Cask Rye is a good example of taking old-style distilling and using new techniques to create a bigger, bolder rye spirit. When a spirit is double-aged, it sits in an oak barrel for some amount of time before it’s then transferred into a second, freshly charred barrel to re-invigorate the flavors of the oak and bring out interesting oak and char notes in the whiskey itself. The result is often a unique, bold expression like Hillrock’s Double Cask Rye. 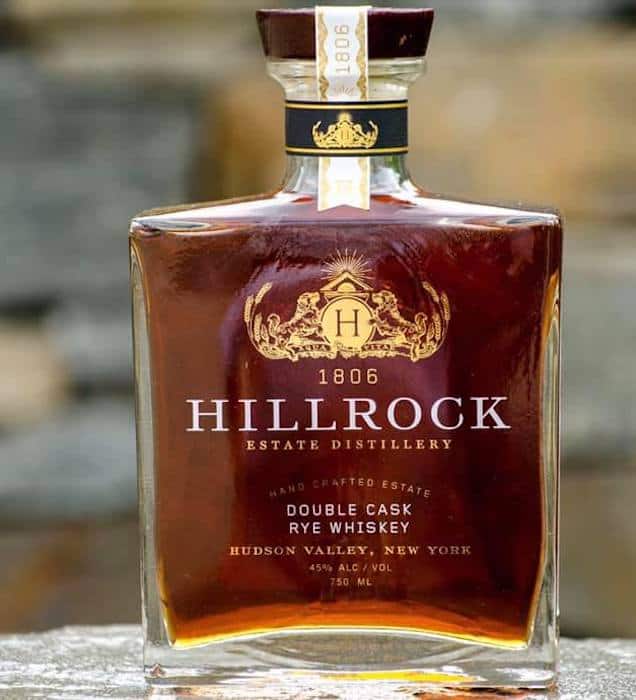 Palate: Starts with quite a bit of sweetness, figs and candied ginger. Butterscotch, lavender, clover and other herbal notes taste like the smell of flowers in a gorgeous country field somewhere, and I feel like that has a lot to do with the terroir of the region. On the back end, flavors unfold into cinnamon and bitter charred oak notes, with tingling rye spice in the background throughout. The mouthfeel is oily, and complements the dichotomy of bitter and sweetness.  The finish gradually, pleasantly mellows into cinnamon and rye spice.

I so appreciate producers taking the time to do things right. Slowly, hand-crafting these whiskies is nothing short of a massive undertaking and I have so much respect for what Hillrock has to offer. I like their double cask rye more on the front end than on the back end. I see that they're trying to create a balance between sweet and bitter notes from the region, but I think the more bitter flavors can be a bit harsh after the full-bodied sweetness on the front end, and the split between the two is a little harsh. I like each flavor individually; I am not so certain they make the perfect pair - but they do come pretty close.

4.0
User Rating 4.33 (3 votes)
Sending
17
Shares
4.7k
Views
Share on FacebookShare on TwitterGet Our Newsletter
Cheers to the Dads! Personalize a bottle of his favorite whiskey to create a modern gift for the modern man. Use code: FATHERSDAY20 for $20 off your next order of $100 or more at ReserveBar