In 1823, an Irish immigrant named Robert Wilson was hard at work in rural Pennsylvania crafting his take on a 100% rye whiskey which he named ‘Highspire.’ Flash-forward almost 200 years to winemaker Austin Hope, a unique visionary who took inspiration from Wilson, along with his pre-Prohibition recipe for 100% rye. He’s using the old world grain-to-glass ethos by sourcing rye grown on the farm down the road from the distillery, although in today’s world, it’s a single-varietal heirloom rye that is specially grown for Hope’s pet project. He also uses his local Kentucky water instead of Wilson’s prized Pennsylvania liquid.

In addition to relying on influences from whiskey history, Hope also looks to innovate. He’s mashed together his wine background and whiskey passion by aging this flagship in used California wine barrels, and created a special system for adding staves in to the barrels to speed up the finishing process. The Highspire that sits before me today is surely a far cry from Robert Wilson’s 1823 masterpiece, but the respect for tradition peppered with the desire to advance the craft makes the 2017 version slightly more interesting, at least on paper.

While there has been some mild controversy about verbiage on this label, it ultimately comes down to the taste and value, and the unique twist on today’s common rye whiskeys has my interest piqued. 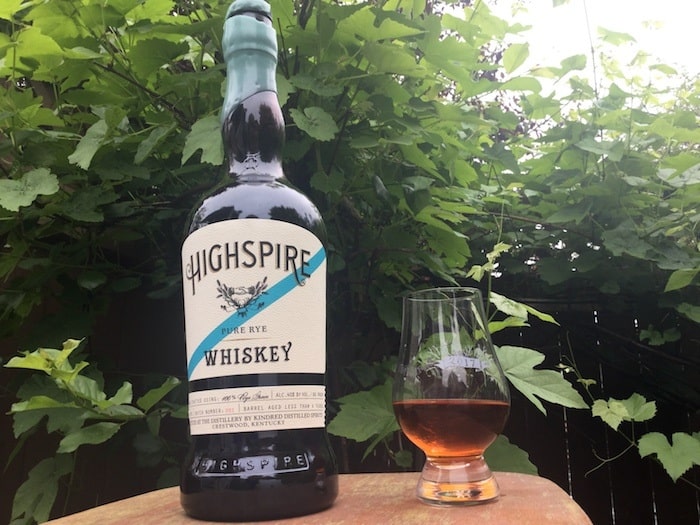 Appearance: Deep amber with reddish hues, slight pinkish notes with a lack of brilliance. Somewhat muddy, seems to be influenced by both the wine barrels and the addition of extra oak.

Nose: This whiskey smells of the essence of the rye grain in a way that is both reminiscent of fresh bread as well as the fruitier aspect of rye, one which possesses bold notes of pear skin, glazed carrots, and is tied together by burnt caramel and a cloud of oak that hovers over the whole sensory experience.

Palate: As the whiskey hits my palate, at first, the maillard-like depth of sugar makes an immediate impression of luxuriousness. The ‘baking bread’ aspect of the nose becomes a big part of the front palate, a perfect compeimentary inhalation to the sweeter, complex caramel note. A touch of green peppercorn appears mid-palate, as well as the numbing, creeping spice from the rye grain which plays well with the mild alcohol presence.

There is a bit of mustiness on the finish, which is the big ding here for me. It starkly contrasts the notes of baking spice, caramel, and hazelnut that build up over multiple sips, and it catches me off-guard each time I gulp. Thankfully, it distracts me from a mild excess of astringency (also in the finish,) which limits my ability to enjoy sans rock.

While this rye will never be among the greats, it is well-made, well-conceived, and suprisingly has its act together for something that, on paper, sounds mildly schizophrenic. It is a good sipper, but will probably find its way into more cocktails than Glencairn glasses in the future.