Last year Dickel came out with a bottled in bond release that really knew how to draw a crowd. While it MSRP’d for around $40, I recently saw it in California for more than twice that. It was definitely a hit in control states where the price was right and the juice was old (13 years). It was also the first bottle under Dickel’s new master distiller Nicole Austin and received pretty solid reviews.

One of the best things about the Dickel brand is that they produce a great ‘go to’ whiskey. They’re price friendly, hit the notes you’re looking for, and work in cocktails really well. I’m particularly fond of their Rye for those very reasons. There’s a handful of Tennessee distilleries operating today, but George Dickel comes from one of the oldest. The Cascade Hollow Distillery was first started by the predecessors to Brown Forman back in the 1870’s. Through the many ups and downs that old distilleries in the States have seen, it is now revived under Diageo’s watch and is doing rather well.

This year’s release is a bit younger, has the same price target and is bound to showcase the uniqueness of Dickel whiskey. The maple wood charcoal filtering is used after distillation, of course. That Lincoln County Process (along with the fact it’s made in Tennessee) allows the Tennessee label. Only Prichard’s is exempt from that rule.

Something I particularly admire about this bottle is the explanation of Bottled In Bond on the side label. While this may take away one job of the bartender, it is another step in the right direction for educating the curious consumer on what they’re drinking. It also continues to establish the legitimacy of label laws and lets people know why the aged spirit inside can be trusted (assuming someone is enforcing those laws!) The next step for a whiskey label will be to explain why the Bottled In Bond act was put into place all those years ago.

On the other side of the label there is a story that George Dickel appreciated his whiskey more when he filtered it in the winter months. This would be a predecessor to chill filtration. While some might argue that removing those congeners and fatty acids reduces flavor and mouthful, it can also increase smoothness and lighten the spirit – something likely necessary back in the late 1800’s when methods were a bit rougher. These days, they chill filter it to stay true to the old recipe and to eliminate cloudiness in cold temperatures. 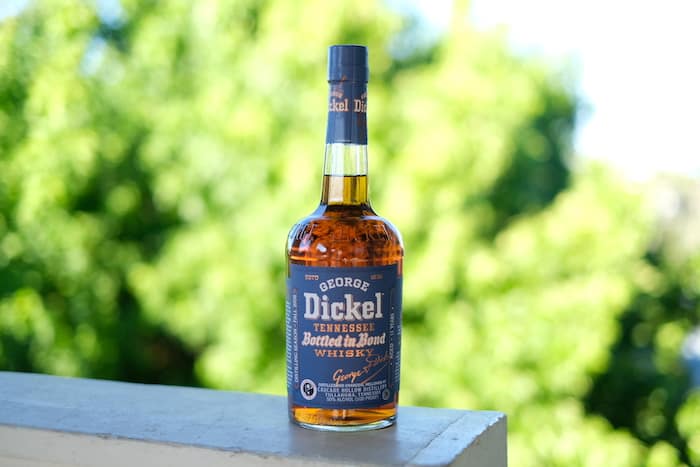 Nose: Definitely has the sour mash nose at the start, it’s followed by green almonds and toasted pecans, light caramel, chocolate, red pepper and a touch of nutmeg.

Palate: Woody grip with nice minerality, orange peel, apple, clove and mint. Leads into darker flavors of caramel, toffee and a bit of pepper and cacao.

This whiskey has a bit of kick. Which you might say ‘of course, it’s 100 proof!’ However, I compared it to a couple other bourbons of a similar age and proof and found the Dickel to be a bit harsh, despite it’s charcoal filtering and old age. I think it’s great on ice, which cools that bite and lets the the chocolate and spice shine. It has a lot of flavor, but isn’t quite a sippin’ whiskey as it claims. For those reasons I believe it’s best in spirit forward or simple shaken cocktails.