Editor’s Note: This whiskey was provided to us as a review sample by Fresh Bourbon. This in no way, per our editorial policies, influenced the final outcome of this review.

“We had tasted a number of bourbons and knew what we liked, what we wanted. If we created a mash bill that could get us closer, have a full flavor profile and long finish, maybe we could create that experience without waiting three to four years.” That’s Sean Edwards of Fresh Bourbon explaining the process that led him to release what is, by all average standards, a very young whiskey at the time I got this sample a few months back, aged just four to six months.

The mash bill is unique: 60% corn, 20% honey malt, 10% malted wheat, and 10% malted rye. Honey malt goes through a specific journey where the malt is slowly dried as the temperature is raised, allowing melanoidins to form. These compounds taste like honey and sweet baked goods. They’re the same tasty molecules formed late in the Maillard reaction.

If mash bill is one half of that equation, small barrels are the other. Typically referred to as “five gallon,” the real volume of Fresh Bourbon barrels is six-point-three gallons. Edwards, with his wife and co-owner Tia, worked with Hartfield & Co., known fillers of the small barrel, to get create the whiskey they imagined.

Small-barrel bourbons have had their share of slights. Edwards has a great retort for this: “One taster said to me, and then he answered his own concern, ‘My experience with small barrels has not been great … but I’ve had the same experience in a large barrel whiskey – some of those aren’t so great.'”

Fresh Bourbon started out in 2017: “We wanted to be very deliberate and authentic, and not hide the process,” said Edwards, “we wanted to create something that was our own, as opposed what was already out there. And we weren’t afraid to ask for help.” Tim Knittel of Distilled Living was instrumental in guiding the Fresh team and figuring out their recipe.

When looking for partners, “Tia was more the interviewer and her palate was the one to please. Smooth is not a flavor, but it is a feeling. We were trying to come up with something that was very refreshing in a sense. Not so harsh, so peppery – something that, when you tasted it, wasn’t burning you all the way down.”

Fresh is recognized by Kentucky as the first African-American owned distillery in the state. That’s just the start of good things to come from this duo. What’s up next for Fresh Bourbon?

“We’ll release [in 2021] in six states. People will be looking for getting out and about and to celebrate any way they can. We’re excited about what’s to come and to be a part of it. We are thought leaders, we want to be always moving forward.” Now that’s a refreshing spirit I can raise a glass to. 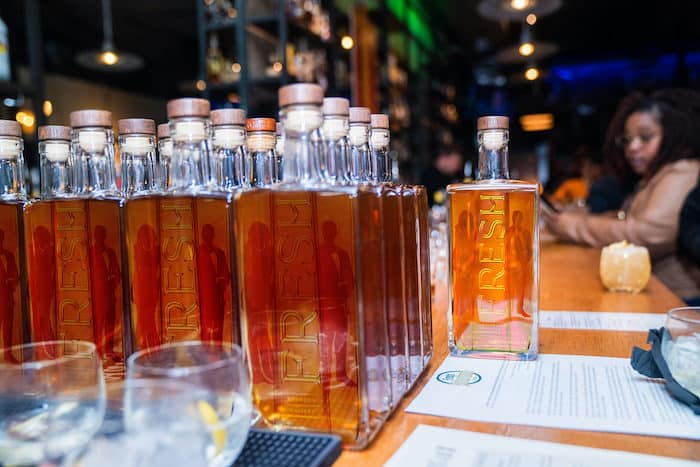 Appearance: This liquid is a pale copper with some particulates that’s slow to form medium tears.

Nose: On the nose it’s fresh ink and fresher 2×4’s, followed by allspice and clove with a breath of sweet hay and brown sugar.

Palate: Light, tea-like body that tastes of grain sweetness and peach skin, with subtle toffee notes. The finish is both perplexing and pleasant: long, redolent of clove and black pepper with no bitterness, it parks in the mid-palate and stays there.

I'm super interested to see future offerings from Fresh Bourbon. What I have here is starting to be a great whiskey, and I'm fascinated that the young nose gave way to a fairly complex flavor. I know they're not alone in using honey malt, but it's a confident percentage and I want to see where that goes. If you have a chance, I'd taste it now.