Editor’s Note: This whiskey was provided to us as a review sample by Filibuster Distillery. This in no way, per our editorial policies, influenced the final outcome of this review. It should also be noted that by clicking the buy link towards the bottom of this review our site receives a small referral payment which helps to support, but not influence, our editorial and other costs.

It’s hard not to talk about whiskey—or anything, really—without it taking a turn into the political realm. But how to avoid, especially when you get to review a whiskey from Filibuster Distillery? Think about the idea of a filibuster being something that takes up too much time so as to prevent a decision—well, maybe that goes for whiskey? That, too, takes time? And you don’t need to make a decision on it for a while, during aging? I’m reaching. But, hey: Time changes things. It changes everything. Like how to age whiskey! In interesting ways!

Filibuster is a woman- and minority-owned distillery located in Maurertown, Virginia, about 90 minutes from Washington, D.C., where the company began, back in 2013. The name, as their website explains, was coined to “lampoon the intensity of the political culture in D.C….maybe if everyone just talked it out over a few drinks, things would go more smoothly?” Thus: Filibuster Distillery was born. We even reviewed several of Filibuster’s offerings a few years ago.

Filibuster differentiates itself by the whiskey it creates, combining traditional aging in new American oak with a shorter, secondary aging period in wine-seasoned French oak—what they call the “Dual Cask Difference.” Filibuster’s location also comes with a deep limestone well, which provides water for the distillery.

The grains used for their Single Estate Bourbon are grown locally at Shenandoah HWK Farms, and the barrels earmarked for this whiskey were aged in the highest level of Filibuster’s warehouse for two years, exposing them to more heat, humidity and evaporation. Only five barrels were tasty enough to make it into this particular whiskey.

Let’s stop filibustering and bust out some tasting details, eh? 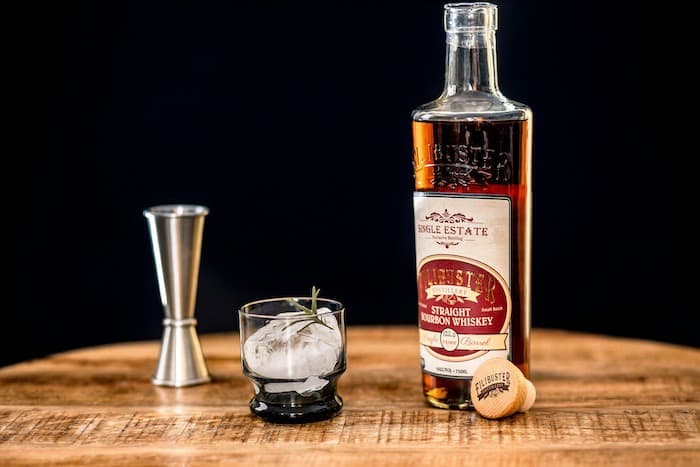 Appearance: Much redder in the bottle than the glass, and I don’t think that’s just because of the red label. It reminds me of a less-cloudy fresh apple cider. In the glass, it’s more the color of supermarket honey in the plastic bear.

Nose: This whiskey’s scent is intriguing. There’s a lot going on there. I get dried blueberries, but I also get yellow cake with chocolate frosting and sprinkles (I swear I’m not hungry while tasting this). There’s also cucumber, but it’s faint, like more cucumber water than the smell of a cut cucumber. Finally: carrots roasted in a little olive oil.

Palate: Funny how I smelled cake, because I taste it, too. It tastes like the oven smells when you open up the oven door to check on a cake that’s baking. A lot of caramel, too, Kraft caramel. Wether’s original. Madelines. So, yes, a lot of baked goods. But also, mandarin orange peel. It’s a little thin on the mouthfeel and it does finish with a little burn but this is unusual, enjoyable, and something to keep around.

Honestly, for a $50ish whiskey, this is a standout. They could price it $20-30 higher and it’d still make sense. It’s a little unusual, but not oddball. More like intriguing!