Whiskey Review Round Up: Filibuster Distillery

Editor’s Note: These whiskeys were provided to us as review samples by Filibuster Distillery. This in no way, per our editorial policies, influenced the final outcome of this review.

A filibuster could be described as a back-pocket tool held by congresspeople, only taken out when they want to stop something from big happening. It’s an act of protest that only bends the rules. Filibuster Distillery takes the same tradition of bending the rules of traditional American styles of whiskey – blending and finds lots of barrels to age them in.

Filibuster’s brand was launched in 2013. The company was founded by the Dilawri family, who after years of experience buying and selling spirits in Washington D.C., decided to take their expertise and craft their own spirits. With the Dilawri’s blending expertise, Filibuster prides itself on the quality 0f its blends and aging process. The company’s dual cask aging techniques use various ex-wine barrels like port or sherry casks. Their dual aging process first ages the product in traditional charred oak and second in wine casks. Their Boondoggler whiskey is aged in five separate barrels. Filibuster’s whiskies are currently sourced from other states like Indiana and Virginia, though they’re working on producing their own expressions.

Filibuster’s wares in the works are currently being distilled on their property in the countryside of Virginia. The land was formerly used as an apple production plant, and Filibuster has found a comfortable home on this quiet acreage, located about an hour outside of Washington D.C. in Virginia’s Shenandoah Valley. The property is complete with a deep limestone well, which provides water for the distillery. In 2017, they completed production of a continuous still, so the general public is still a little ways away from being able to sample their whiskies produced in-house. The company will begin releasing their own products when they are “appropriately aged.” 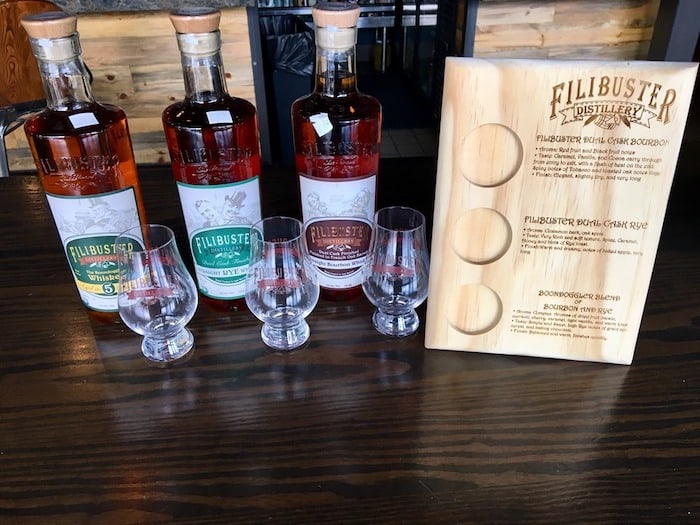 Vital Stats: Filibuster’s Rye, a blend of sourced whiskies, is dual aged in American and French oak casks, the latter of which formerly held white wine. The mash bill is 90% rye and 10% malted barley. ABV sits at 45% (90 proof).

Appearance: Their rye is light and golden, with canary yellow hues and pine tree long and jagged legs.

Nose: Big vanilla notes and light, crisp green apples. Butterscotch and caramel sweetness are offset by delicate vinous fruit. The sweetness makes it a little hard to notice nuances in the flavor. It’s a little overpowering, but makes for a really interesting rye whiskey. It’s less of a tough guy rye, which makes it stand out a little in a growing rye market.

Palate: The signature spice of the rye is there and leaves my mouth feeling like I’ve been sucking on pennies. It’s coppery and sweet, with more notes of vanilla. It’s got a bready aftertaste, with a lingering spice. Vanilla, grass, green grapes and brown sugar make it a chewy, bolder non-traditional rye. I can taste the char from the oak barrels and the tanginess and tannins from the wine-soaked barrels.

Final Thoughts: I’m not a huge fan of this version of rye whiskey – it’s a little too sweet and unbalanced the rye was a little sour. I think the wine aging made the flavor profile more confusing than complex in this instance. I liked the spice from the rye and how it lingered through the finish.

Appearance: Golden, amber and reddish in color. It’s got a deep and heavy glow, and moves slowly around the glass.

Nose: Their aged bourbon radiates fragrant Chardonnay, light oak and Japanese white cherry blossom. There are also notes of JuicyFruit gum, along with hints of vanilla and citrus.

Palate: White wine and cinnamon, rye bread at first blend into stronger, spicier tastes of charred oak and rye bread. It’s sweet, with a long finish. It tastes like the skin from green grapes, tossed with dewy grass and dark leather.

Final Thoughts: I like how light and bright it is at the beginning. The more I sip, the more complexities and nuances are available in the flavor profile. It was sweet without being overpowering, and I liked the floral notes. Super easy to sip neat.

Vital Stats: The story on the bottle says it was originally crafted for their master blender’s personal enjoyment. It was aged in five separate barrels: New American oak, red and white wine-soaked French oak casks, and two kinds of sherry casks. That’s a lot of barrels! It was distilled in Virginia and Indiana, and is 45% ABV. The Boondoggler retails for $35 per bottle.

Appearance: Lighter and more yellow in color than the other two. Golden hues shimmer throughout; the legs are light and dance delicately.

Nose: On the nose it smells like a more traditional whiskey. There are notes of dark fruit, oak and vanilla. Angel food cake and other pastries add to the overall sweetness, and orange peels add acidity and bitterness.

Palate: It’s super sweet, with lots of dark fruits. Blackberries, Red Delicious apples, maraschino cherries, sweet rolls and green grapes. There’s definitely a lot to chew on, but it’s not overwhelming. All of the flavors have a nice balance, even though the finished product pretty much doesn’t taste anything like whiskey. It’s got the same appearance and mouthfeel, but the deep and rich fruit flavors easily cover up the flavors of the original whiskey. There are slight hints of oak in the finish in case you’d forgotten its origins.

Final Thoughts: The Boondoggler is mind-boondoggling. It’s a little hard to put together the smell and the overall sweetness on the palate, as it doesn’t seem to match. I normally enjoy a sweeter whiskey, but I can’t really taste much else besides sweetness, although the flavors present are very balanced. I think it would be fun to experiment with making Boondoggler cocktails.

14
Shares
2.5k
Views
Share on FacebookShare on TwitterGet Our Newsletter
Cheers to the Dads! Personalize a bottle of his favorite whiskey to create a modern gift for the modern man. Use code: FATHERSDAY20 for $20 off your next order of $100 or more at ReserveBar