Editor’s Note: This whiskey was provided to us as a review sample by Eastern Kille Distillery. This in no way, per our editorial policies, influenced the final outcome of this review.

The Eastern Kille Distillery isn’t exactly a new brand. Due to copyright disputes, the company formerly known as the Gray Skies Distillery had to re-brand in 2019.  We’ve seen this sort of thing before, and likely will be seeing it again. The Gray Skies name had been around for a few years before the dispute came in and eventually had to take a new course.

At the time, co-founder Brandon Vorhees didn’t have much to say about the change in name, just that it was an opportunity for a positive move. The word “kille” translates to “riverbank” in Dutch and seems fitting. The distillery sits on the eastern side of the Grand River in Michigan. The name is now a testament to the company’s location and a nod to it’s roots.

In a statement to MiBiz, which reported on the copyright dispute, Vorhee’s tells of the inspiration and the company’s drive to move forward.

“We wanted a name that invokes a place. We take pride in where we make (our spirits). We’re excited about our new name; it’s a great brand for Michigan moving forward, and we’re excited for our first bourbon release.”

In regards to the entry in the competition, another co-founder, Steve Vander Pol expressed pride in what the company had achieved.

“We are proud to receive recognition from San Francisco, which is widely regarded as the most important spirits competition in the world, for our bottled-in-bond bourbon. This gold award represents over four years of a truly craft process; the process we founded our distillery on.” 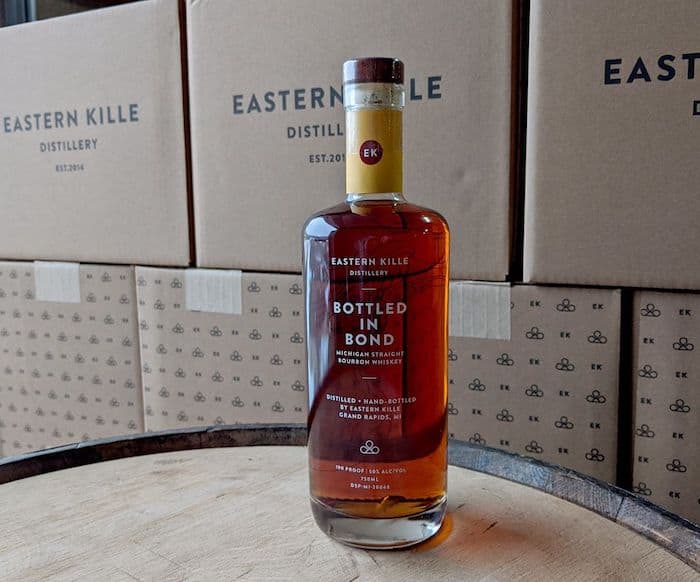 Appearance: Not in a bad way, immediately reminded me of an orange cough syrup, maybe a touch lighter in color. In other words, it is a darker shade of orange. Appears to be of a lighter body and when given a swirl, produced some slower, long legs.

Nose: The nose was immediately bright and fresh. Primarily, I picked up some essences of an orange spice black tea. These were the broad strokes, as the tea and fruit were pretty much straight forward. I gave it a moment to settle and found smoked honey and melon hiding in the background.

Palate: Discovered this one as to be mildly complex. Once more, citrus takes the front seat, but also floral notes mixed with a slight earthiness. This one had a medium finish, accented by a speck or two of black pepper.

I thought that this was a great first release for a bottled-in-bond. There are a lot of classic notes along with an unexpected complexity. This whiskey invokes a sense of memories in ways that I can't quite describe. Youthful experiences mixed with the familiar bourbon notions.

And yet, I still want more accents or bigger flavors. Personally, I would love to re-visit these folks in a few years. Maybe even get a taste from a barrel or two.