Eagle Rare is a true friend. This standard issue bourbon from Buffalo Trace is that rare entity: a whiskey both truly delicious and truly affordable. From the back bar of anonymous watering holes across the country, it beams a reassuring aura of quality and pleasure, available to anybody with a $10 and a clue.

Eagle Rare 17-year-old is the old standby, all grown up. It’s an annual release that’s part of Buffalo Trace’s Antique Collection, the five-bottle series of limited edition, highly collectible bourbons Buffalo Trace launches in the autumn of each year.

The release of the Antique Collection—BTAC for short—is a hotly anticipated event in the bourbon world, and while the manufacturer’s suggested retail price is a modest $90, most people end up paying a lot more, either because they buy their bottles on the secondary market, or because their retailers mark up the bottles in response to enormous demand.

Last year’s Eagle Rare 17-Year-Old came from warehouses H and K, and won a Silver Outstanding Medal at the 2017 International Wine and Spirits Competition. This year’s blend is a little different, made up of a collection of barrels aged on the first, second, and third floors of warehouses C, K, and P. 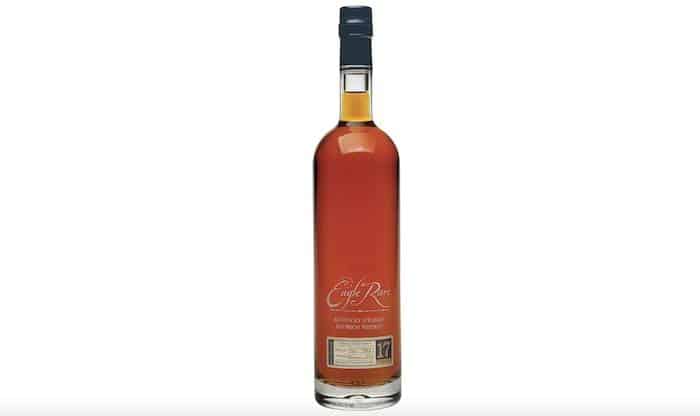 Nose: Right off the bat, it’s very sweet and sugary, with notes of vanilla, custard, powdered sugar, and well-baked shortbread. As it rests in the glass, waxy, fruity aromas emerge, like an orange-scented candle. I also notice a roasty quality, with corn kernels, leather, nutmeg, and black pepper. The aroma is very pleasant.

Palate: On the palate, it’s not as sweet as the nose would suggest. There’s a lean quality to the palate, but it’s pleasant—taught, not tight. A feather-light entry introduces a mid-palate burnt sugar bitterness adorned with orange peel, cherry, and vanilla bean. Although there’s minimal tannin, it’s not slick—there’s texture here, but it’s understated—velvet, not corduroy. The drinking experience isn’t as “easy” as years past, but rewarding all the same. The finish is of moderate length, with nice integrated oak and a bit of side-of-tongue tartness to keep things fresh.