Editor’s Note: This whiskey was provided to us as a review sample by Duke Spirits. This in no way, per our editorial policies, influenced the final outcome of this review.

So, where do we start with this story? The Duke, I suppose. His name was John Wayne, born in 1907 and passed in 1979 at the age of 72. A storied life with many accolades. It’s insane. Looking further into the life and history of this man, it’s a tough focus on the whiskey. There’s a lot to go through. A lot of stories, critiques, etc. I’ll leave you with a little fact. After his passing, Wayne’s family was awarded a Congressional Gold Medal. Among the statements sent to Congress, Frank Sinatra was a participant, even though they had some disagreements in the past.

Back to business. The Duke Bourbon is managed at O.Z. Tyler distillery in Owensboro, Kentucky for non-distilling producer Duke Spirits. Thus, contracted out, etc. But that’s not always a bad thing. The distillery has a long storied history to it before landing into the hands of TerrePURE Kentucky Distillers. Veteran distillers Ron Call (second generation) and his son, Jacob, (third generation) came on board to help get the operations underway. Soon after, Jacob was hired as O.Z. Tyler’s Master Distiller, overseeing all aspects of whiskey production and warehousing for the facility.

The recipe for this bourbon is said to replicate Wayne’s favorites from his private collection from 1962. His son, Ethan, is among the curators of the whiskey, as well as distillers/blenders Chris Radomski and Jacob Call.  The bourbon is a blend, set at 88 proof and aged in heavily charred new American oak barrels. There are also other expressions of the Duke, including a Grand Cru finished in wine casks, as well as a double barreled rye in the pipeline. 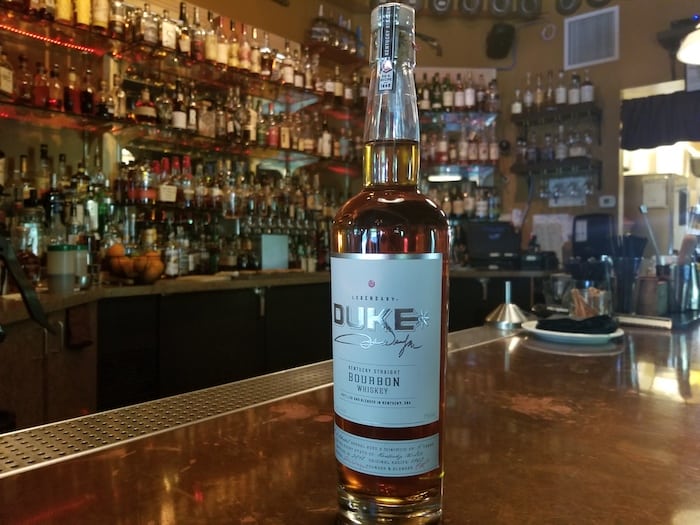 Appearance: A deep red, medium bodied, leathery. There is an updated bottle labeling, giving it a tad bit more panache and the fact that the name, “Duke” is printed on the cork is a nice touch.

Palate: Right up front, vanilla and candied fruit. After the fact, pick up flavors of toffee and brown sugar. It’s got a long finish with a hint of clove and cinnamon.

The Duke is a win. It's solid as a stand alone whiskey and at 88 proof can play well in cocktails. It hits all of the right notes, without being too complicated.

Wayne has also been noted as having an affinity for Scotch and Tequila. I am hoping to taste further expressions from his son, Ethan, and company in the future!