Doc Swinson’s launched when Washington State passed a law that made it difficult for the parent company, Distiller’s Way, to continue creating private spirit labels for clients. Sitting on barrels, Jesse Parker and his business partners bought more barrels to create the new brand.

While Doc Swinson’s imports their whiskey from MGP, Parker works tirelessly as Head Blender. The lineup consists of the usual bourbons and ryes, plus experimental casks and different finishes. We previously reviewed Doc Swinson’s Alter Ego Solera Method Rum Finish (Batch 21-003), but they have since come out with another batch.

A solera system is a rare find in the whiskey industry. Only a handful of distilleries use this method to age their spirits, including Doc Swinson’s. The solera method entails a series of casks of various ages. Bottlings pull from the longest-aged cask, but some liquid remains in the cask. After bottling each batch, liquid from the next-oldest layer of casks then fills the oldest cask in preparation for future bottlings – and those next-oldest layer of casks are, in turn, topped up with slightly younger whiskey from the preceding layer of casks. These fractioned refills create a consistent blend of varying ages.

Doc Swinson’s established their Solera system in 2020. It is made up of ex-bourbon casks that aged their rum blend upwards of seven years. The rum cask solera is then filled with a blend of three MGP ryes aged three years, four years, and six years. Because of the solera method, the new batch has some of the previous batches in it to keep consistency. The result works as intended and comparing both batches I can attest they are very similar. Below are my tasting notes for Doc Swinson’s latest Alter Ego Rye Solera Method Rum Finish. 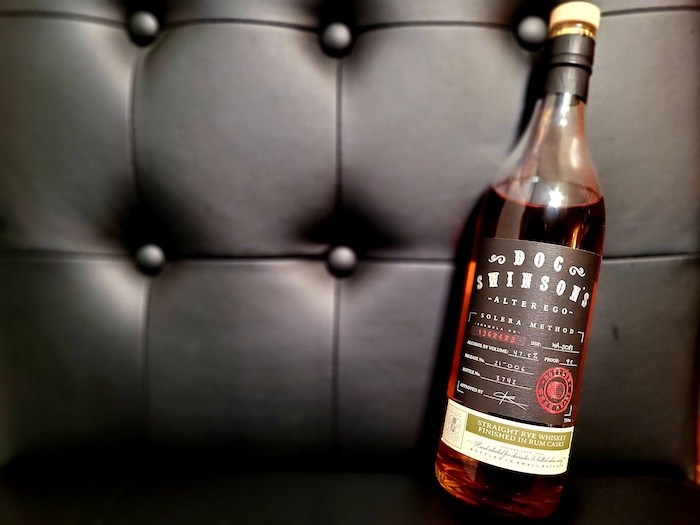 Nose: The first thing I notice is bright green apple. With a hint of cinnamon, the whiskey just reminds of apple pie. Fig lingers subtly in the background amidst cardamom and clove. The aroma of salted peanuts hovers above the dram.

Palate: The tongue is greeted by white dog and heat. Clove and cinnamon pop through with a mellowness. The fruit from the nose is missing on the palate, but the nuttiness is on the finish.

While a side-by-side tasting of Batch 21-003 and Batch 21-006 of Doc Swinson’s Alter Ego Rye Solera Method Rum Finish reveals how similar the two are, the latest batch does not provide any oomph on the palate. The nose is quite delicate and fruity, so when the palate just tastes like ethereal fresh distillate I was a bit disappointed. Keep in mind, rum finishes are hit and miss with me.