Doc Swinson’s launched when Washington State passed a law that made it difficult for the parent company, Distiller’s Way, to continue creating private spirit labels for clients. The liquor industry, in times of crisis, knows how to pivot.

Sitting on barrels, Jesse Parker and his business partners bought more barrels to create the new brand. While Doc Swinson’s imports their whiskey from MGP, Parker works tirelessly as Head Blender. The lineup consists of the usual bourbons and ryes, plus experimental casks and different finishes. Recently, Doc Swinson’s released a solera-method rum finish under their Alter Ego label.

A solera system is a rare find in the whiskey industry. Only a handful of distilleries use this method to age their spirits, including Doc Swinson’s. The solera method entails a series of casks of various ages. Bottlings are pulled from the longest-aged cask, but it’s never entirely emptied. After bottling each batch, liquid from the next-oldest layer of casks then fills the oldest cask in preparation for future bottlings – and those next-oldest layer of casks are, in turn, topped up with slightly younger whiskey from the preceding layer of casks. These fractioned refills create a consistent blend of varying ages.

Doc Swinson’s established their Solera system in 2020. It is made up of ex-bourbon casks that aged their rum blend upwards of seven years. The rum cask solera is then filled with a blend of three MGP ryes aged three years, four years, and six years. 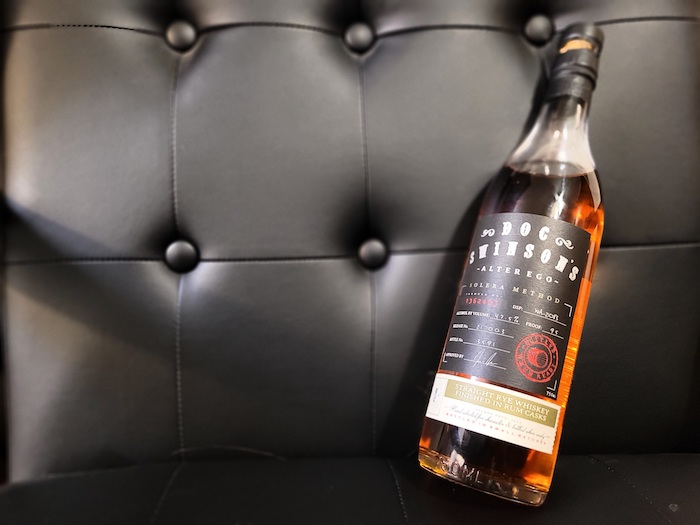 Nose: The nostrils are immediately hit with brown sugar, cinnamon, rich Demerara syrup and creme brûlée. Espresso bean and cocoa powder peek out toward the end of the nose.

Palate: The mouthfeel is soft and delicate. I was expecting an overpowering heat from the rum finish but it was not there. Instead, the rum finish complements the rye profile and accentuates the rye spices. Aside from the spice, the whiskey has a sweet molasses taste and a jumble of stone fruit, raisin, and orange. The fruit is not too much, and it comes and goes quickly. Finally, the finish leaves sweet cream and tobacco on the palate.

Doc Swinson's Alter Ego Rye Solera Method Rum Finish is an excellent whiskey to add to any collection. It is perfectly good to drink neat or mix in a cocktail. If you like rum finishes, this whiskey stands out. Keep an eye for more releases by Jesse Parker at Doc Swinson's, because he is blending some good stuff.