Confined to home one ski season nursing two post-surgery knees, former graphic designer/homebrewer Lenny Eckstein thought he’d focus his spare time and attention on making whiskey. “My first batch was disgusting, but I took that as a challenge,” Eckstein confessed back in 2013.

Realizing his days behind a computer screen were far less interesting than his newfound hobby, Eckstein, along with his wife, Amy, decided to open Deerhammer in 2012 with the knowledge of both homebrewing and distilling to get them started. Eckstein oversees the entire process on-site at his Buena Vista, Colorado distillery, from the milling of malted barley to the two-at-a-time bottling, creating what he calls a “Simple. Honest Colorado whiskey, grain to glass.”

Back in July, we were able to try Deerhammer’s flagship single malt, and this product’s base spirit (minus port finishing,) and found it to be “appealing,” “complex,” and “very interesting.” The original is aged two years in oak, but this first-ever variation sees an additional year in used port wine barrels, adding what the distillery refers to as “nuanced flavors of dark fruit, caramel, and tannins.” Only 2,500 bottles of this unique twist on a single malt are available in the marketplace (and sadly, only in Colorado.) 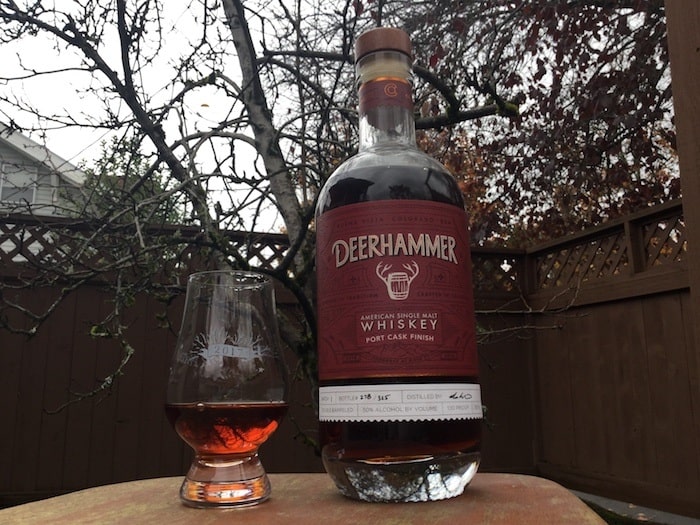 Appearance: There is no question that this spirit is red. There are some twinkles of burnt sienna running around the edges of the liquid, but the wine casks have stained this single malt just like a set of human teeth. Swirling the whiskey showcases its mammoth viscosity as it sticks heavily and thick to the glass’ interior, and is very slow to creep down its inner walls. While not the brightest, it certainly stands out in its fiery and deep redness.

Nose: The suggested dark fruits are certainly evident first and foremost on the nose, and as expected, they are mostly grapes. Hints of pie cherry and blackberry dance around the edge, but the deep, leather-soaked, oxidized aroma of grape-meets-raisin that defines port wine jumps out with every sniff. It plays somewhat cohesively with the buttery, vanilla note that comes from three years in oak, creating a very sophisticated, desserty aroma. The grain-forward complexity usually offered in the nose of an American single malt is extremely muted here, softly offering a sidecar of peanut shell and baking spice.

Palate: While the aroma promises more balance and cohesion, the first sip is a messy explosion. The strong buttery quality fills my nasal cavity as both a sharp booziness and tannic astringency dominates my early palate. A perceived sweetness from the fruit-stained wood gives some wisp of balance or relief, but the dry, alcoholic nature of this spirit limits sippable enjoyment. As my senses acclamate to the strong punches this single malt throws, I’m able to fish out some notes of black pepper, hazelnut, and a vanilla-like finish that lingers alongside a vicious burn.

While interesting and fun in its experimentation, the final result seems disjointed and overwhelmingly intense. Those in search of a sharp, bold single malt, full of fire and guaranteed to wake up the palate may enjoy this one-off, but I'm gonna reach for ice or cocktail ingredients before reopening this particular bottle.