Editor’s Note: This whiskey was provided to us as a review sample by Sran Spirits. This in no way, per our editorial policies, influenced the final outcome of this review. It should also be noted that by clicking the buy link towards the bottom of this review our site receives a small referral payment which helps to support, but not influence, our editorial and other costs.

Sran Spirits began in 2019 as an idea between brothers Andy and Sonny Sran. This is an incredibly bold move for the brothers, whom both are currently working in the technology industry and have decided to make the leap into the realm of spirits. The spirits company, based in Scottsdale, Arizona is 100% funded by the brothers with zero additional investors. Daru Whiskey is the premier product in their journey.

However, the actual journey began decades ago with their father in the Punjab region of Northern India. The Sran family had lived there for generations dating back to the 1800s whereupon they had settled into the farming sector. Their father was passed down techniques and recipes for distilling spirits, though given their location it wasn’t legally permitted to produce alcohol. Naturally, he did it anyway out in the fields in secret, though not for monetary gains but for family and friends to enjoy.

We get back to the now with Andy and Sonny living in America. They shared a love of whiskey, so why not give it a go? Beginning one evening, ideas and research began, knowing that it would likely be a tough road given the boldness of the endeavor.

“With no expertise in the industry, we began what would be nearly a year of research, cold-calling, strategy shifts, and many other obstacles as we tried to penetrate and make our mark in the spirits industry. The result? We incorporated Sran Spirits in the summer of 2019 and got all of our licenses and permits. The culmination of that work is what we have today, which is the first of many products under the Sran Spirits umbrella: Daru Whiskey.”

In case you were wondering, the word “Daru” in Indian translates to an alcoholic beverage. It seems fitting and whiskey is a great place to begin the Sran spirits journey. In the future, there are plans for other spirits and possibly a seltzer. 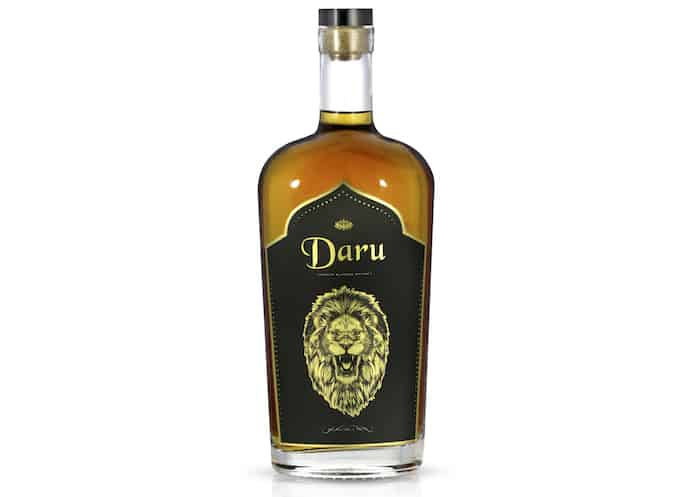 Vital Stats: 80 proof, 40% ABV. Whiskey sourced from Canada and aged at least three years. Mash bill is 100% corn. ~ $30 per 750ml bottle and will begin distribution in Arizona and California in summer of 2020, followed by wider distribution after that.

Nose: The first whiff is pretty astringent. Second whiff gets aromas of toasted corn, imagine that! Lingering in the background is a certain earthiness and a distinct eucalyptus note. As a whole, however, there isn’t a whole lot going on.

Palate: This was a lighter bodied whiskey with flavors of honey, corn, and a touch of vanilla. In regards to finish, it was pretty short, though the boozy presence stuck around for a while. Similar to the nose, this one is simple and straightforward.

Let’s start with the whiskey. It’s not very balanced. Immediate thoughts were that it could definitely use more aging and possibly a diversified mash bill. Or go the other direction with a high proof, straight corn whiskey route with less aging. This one simply lacks identity. Kind of boozy up front, some sweetness, and then not much else.

I do love the familial origins and the fact that the brothers are the only employees and are doing this on their own dime. It’s a tough business and they have a lot to learn. But hey, you gotta start somewhere.