Crown Royal Blenders’ Mash, originally called Bourbon Mash, is the first release in their Crown Royal Blenders’ Series, which is meant to showcase the art of blending whiskies. The company touts in a press release that the Blenders’ Mash is one of the more complex and flavorful of the series. With flavor profiles similar to the prolific American spirit, Bourbon Mash was made as an homage to classic bourbon flavors.

However, Crown Royal was forced to change the name after a slight blunder; any bourbon product must be made in the USA. The company was too far into the release to change it right away, and the second rollout is only a slight rebranding.

Blending whiskey might have a bad rap as a way for companies to dilute their product and make more money. That could be true in some cases, but there’s definitely a lot more going on with blended whiskey than one might think. Even a drop too many of one flavor could have an effect on the entire blend. In order to be called blended whiskey, a spirit must be at least 20% whiskey and up to 100% whiskey. Beyond that, though, the other 80% remaining can be ingredients other than whisky, including neutral grain spirits, flavors, or colors.

For the curious, Flaviar offers a step by step tutorial with tips on how to experiment with blending your own whiskey. 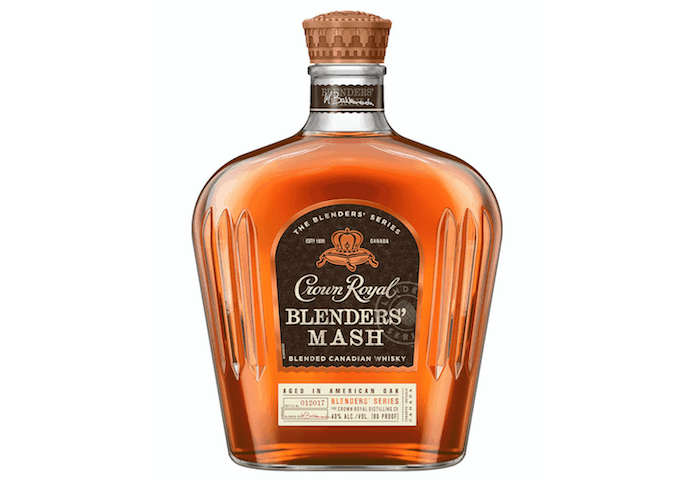 Nose: The blend showcases straightforward smells of  sweet corn, Red Delicious apples, toasted caramel, and vanilla bean. The smell is very similar to a simple bourbon, with more fruit flavors standing out. There are also pronounced notes of oak and a slight smokiness in the background.

Palate: The flavor is sweet, with plenty of fruity notes: red apples, bing cherries, dried fig. More sweetness comes in when the body introduces butterscotch, toffee and vanilla. There’s a slight oakiness from the aging, but the sweet corn syrupy texture and flavor blocks out those complexities. The finish is a little hot, but dissipates quickly. Overall, the whisky has a very soft mouthfeel, and is pretty easy to drink neat or with an ice cube. I also made some cocktails with it to try it out, and much preferred to drink it with some mint and soda water.

I didn't feel any particular way about Crown Royal Blenders' Mash. It was very sweet, with nothing too exciting going on, and it definitely tasted like Crown Royal. If I were to bring home a bottle, I would use it to make Mint Juleps or Manhattans, because the sweetness would go nicely with the sweetness of the whisky.