If there’s one thing you can count on from Corsair Artisan, it’s that they won’t stop looking for new ways to distill liquor, particularly whiskey.

Since its founders and Nashville natives Darek Bell and Andrew Webber turned from homebrewing to distilling about 10 years ago, the Tennessee- and Kentucky-based distiller has earned acclaim for its whiskey, but also the types of grain used to make it. We’ve previously reviewed their Grainiac 9 Grain Bourbon, Triple Smoke Malt Whiskey, Quinoa Whiskey and “Ryemageddon.”

That brings us to Wildfire: Corsair’s malt whiskey distilled from hickory-smoked barley.

Added to their product line in 2015, Wildfire marks the first of Corsair whiskey made “grain to glass” completely in house, using barley that was grown, malted, and smoked at a Corsair-owned farm in rural Tennessee.

Corsair, for this whiskey, notes that 100% of the barley is hickory-smoked and that the final product is bottled at 100-proof. 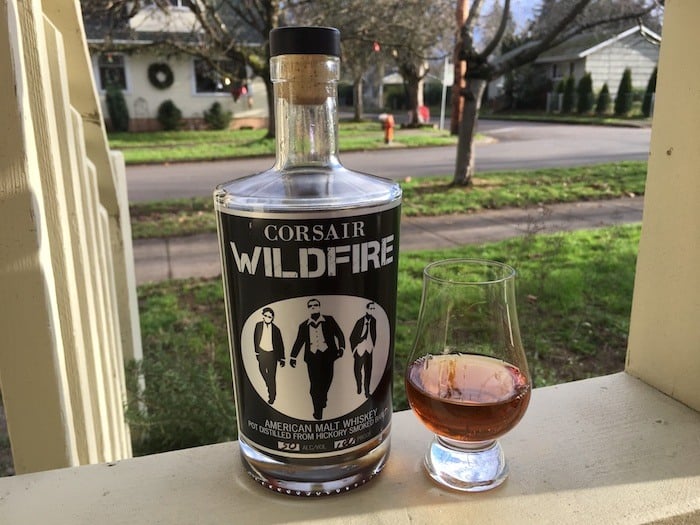 Vital stats: Mash of 100% hickory-smoked barley, pot distilled with no age statement. Bottled at 50% ABV and sold for just over $50 per 750mL bottle.

Appearance: On the darker side of whiskey with a reddish, copper hue.

Nose: Starts off smoky from the get-go – perhaps unsurprisingly – but with a sweeter and brighter bouquet of scents that includes butterscotch, caramel, oak and a hint of flowers. That eventually develops into more of a barbecue sauce flavor: sweet like molasses with tangy notes vinegar, garlic, and smoke.

Palate: The first sip makes its way onto the tongue like an earthy, mellow vanilla for the first couple seconds. That grows earthier and spicier as notes of clove and pepper – along with a hint of tangy vinegar – develop and grow in potency as the sip remains on the tongue, mildly stinging the tongue. Swallowing briefly strips the spicy flavors away leaving a sweet, cooked molasses flavor on the tongue, again with a touch of vinegar. The spicy flavors eventually build back up to tingle throughout the mouth and fade again to leave a smoky, sugary residue on the tongue.

Corsair is absolutely correct when they say Wildfire is reminiscent of barbecue sauce. I’m impressed that hickory-smoked barley can imbue that savory flavor into a whiskey, and I give Corsair points for yet another extremely unique product. However, I can’t think of many cases in which I’d really want a whiskey that tastes so much like barbecue, other than as an ingredient in barbecue. So, unless you're really jonesing for a taste of a summer cookout this winter, maybe keep browsing.