Despite their location in the bourbon heartland, Kentucky- and Tennessee-based Corsair is well-known for being one of the more off-kilter craft distilleries, having made their mark with weird experiments like quinoa whiskey, and unique takes on craft trends like cherry-smoked whiskey.

Corsair’s brand is “booze for badasses,” and that macho perspective touches everything from the distillery’s seemingly Reservoir Dogs-inspired logo to the beat-you-over-the-head ethos of some of their spirits. That’s not to say it’s bad whiskey. It’s just kind of a lot. The distillery is pretty much anti-subtlety, naming their inventions with aggressive puns like Buck Yeah and Oatrage.

That ethos is perhaps nowhere more on display than with Grainiac, a bourbon made with a real mouthful of a mash bill: in addition to corn, barley, rye, and wheat, it contains oats, quinoa, triticale, spelt, and buckwheat. That’s all the grains Corsair uses as a distillery, in one expression. Buckle up!

This is labeled as bourbon, meaning it has to be at least 51% corn. There’s no word on what proportions the other grains are used in, or on aging. It’s bottled at 94 proof. 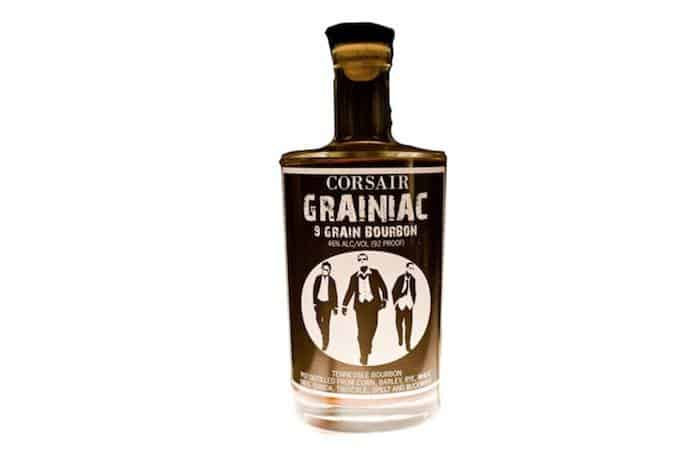 Nose: Predominantly sweet, but it leans toward dark, intense sweet, not sugary sweet—think rich vanilla, dark caramel, and burnt sugar, verging into leather and dark chocolate. I also get some hot cinnamon. In the empty glass, I even get smoke.

Palate: More caramel and burnt sugar, with oak more apparent than on the nose. Texturally, it’s fairly hot and very mouth-coating, almost drying. I get a little cocoa on the back of the palate.

I can't help feeling like this bourbon is yelling at me.

It probably shouldn't come as a surprise that a whiskey made with nine different grains ends up tasting like none of them. Typically, you can pick out which notes in a bourbon come from which source: high-rye bourbons are spicy, wheated bourbons are soft and floral. When it comes to less traditional craft whiskeys, changing one variable—say, using a unique variety of corn—results in a distinct, identifiable character.

So in adding five or six completely new variables, Corsair has come up with something that tastes simply like capital-B Bourbon. I can imagine enjoying this a lot if I wanted to feel like a very big, strong man, or if an ice storm knocked the power out and I had to keep warm. I don't mean any of that passive-aggressively: you just have to be in the right mood for this whiskey.