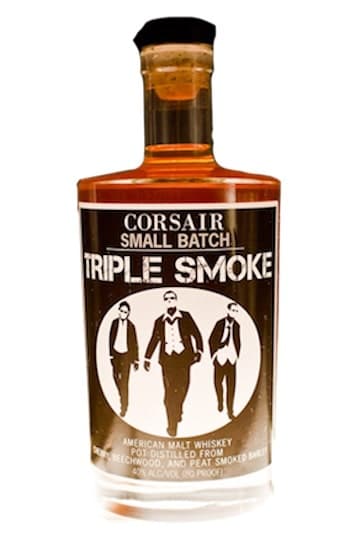 The founders of Corsair Artisan Distillery started out as homebrewers, and it seems to me that background influences them even today. The craft beer world has long been driven by a desire to experiment, to tinker, to iterate – and then a compulsion to give the results of those experiments tongue-in-cheek (sometimes cringe-inducing) names.

We’ve recently reviewed Corsair oddities like a quinoa whiskey as well as a rye release called “Ryemageddon,” a name that would be perfectly at home on a tap handle pouring some kind of ultra-hopped, 11% ABV, triple rye IPA while Steely Dan plays on the jukebox. They’ve made bourbon with 12 different grains, an oat whiskey called “Oatrage,” and a pumpkin spice moonshine – perfect, I imagine, for giving that Starbucks latte a certain extra kick.

Goofy names and silly branding aside, Corsair’s made the experimental approach work for them. They regularly win awards for their unusual spirits, and perhaps more than any other producer I can think of, they’re clearly having a lot of fun exploring the outer reaches of American distilling.

According to Darek Bell, one of Corsair’s co-founders, Corsair Triple Smoke was inspired by a trip to a part of the world where tradition, rather than innovation, drives most whiskey production. “I was in Scotland at the Bruichladdich distilling academy trying all these amazing peat smoked single malts. I wondered why there are no American smoked whiskies when there is such a great tradition of smoking meat with the generous hardwoods we have here,” he writes in his book Alt Whiskies: Alternative Grains and Techniques for the Adventurous Distiller.

Though it’s made in Nashville, Tennessee, in the heart of corn whiskey country, Corsair Triple Smoke is actually a single malt. The mash bill consists of three equal fractions of malted barley, each smoked by one of three different fuels: cherrywood smoked malt from North America, German beechwood smoked malt, and Scottish peated malt. His recipe in Alt Whiskies also includes a bit of chocolate malt, less than 5% of the total grain bill.

Triple Smoke is double distilled on Corsair’s pot still before being aged for an undisclosed length of time in new charred oak. In his recipe, Bell warns readers that six months of aging is enough for Triple Smoke, “any more and the smoke will begin to dissipate.” Six months doesn’t sound like much, but this whiskey is so bold and full-flavored that I’d never guess it spent just half a year resting in oak.

Triple Smoke holds true to the American barbecue tradition, simultaneously very smoky, very savory, and very sweet, like the sticky burnt ends of a well-lacquered rack of ribs. Bell claims – which I believe wholeheartedly – that it pairs well with smoked meats or cheeses.

Appearance: A wan auburn, slightly cloudy in the bottle even at room temperature.

Nose: This whiskey smells like eating dessert – maybe a creamy cherry trifle – right next to a smoldering barbecue. Notes of vanilla, caramel, cherry, and egg custard mingle with a hint of model airplane glue and a strong impression of ashy coals. There’s less smoke in the nose than I expected.

Palate: The entry starts off sweet, with flavors of cherry, banana, and nectarine, before smoke becomes much more evident in the mid-palate. It’s a bit acrid, reminiscent of German rauchbier. The finish is tart and on the short side, but with a lingering warm graininess that reminds me of Scottish single malt.

Triple Smoke is totally unique. Unlike many craft whiskies, it doesn’t taste like an imitation of something else. There are lots of bourbon-style notes, including a pronounced sweetness that’s almost liqueur-like, but the smoke adds a pleasant, balancing bitterness. It would be right at home in a Manhattan – in fact, if I didn’t know better, I’d almost believe vermouth had already been added.