Editor’s Note: This whiskey was provided to us as a review sample by Buffalo Trace. This in no way, per our editorial policies, influenced the final outcome of this review.

Colonel E.H. Taylor whiskeys. They’re a favorite among fans of Buffalo Trace products and their fun releases are, well, fun. Historically, they have put out a barrel strength, the four grain, cured oak, among others. I’ll admit, hearing the story and having a taste of that Warehouse C Tornado Surviving bourbon was something else.

The new Colonel E.H. Taylor, Jr. Amaranth Bourbon Whiskey makes use of Amaranth as a grain type alongside the more traditional corn (Buffalo Trace Mashbill #1) and malted barley. Amaranth was originally cultivated by the Aztecs and is called “the Grain of the Gods.” It is similar to wheat, but is said to offer “a complex taste with subtle flavors ranging from a nose of butterscotch and spearmint, to a finish of pecans and dark berries.”

Time to talk amaranth. Small grain, high protein, and gluten free. Due to the nutritional elements, it is starting to gain popularity internationally as a sustainable food source. Color-wise, it can range from a pale yellow to a light red and will be around 1mm in diameter. As a grain in whiskey, my general impression was that it brought some fruit elements to the table. 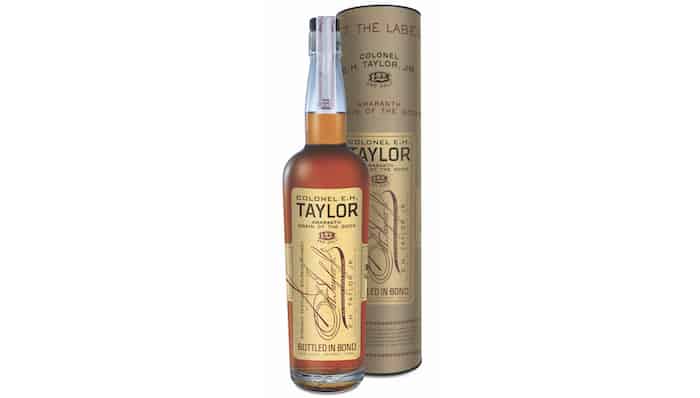 Vital Stats: Bottled in bond, 100 proof, 50% ABV. Distilled by Buffalo Trace with a mashbill of corn, amaranth, and malted barley. No age statement. ~ about $70 per 750ml

Appearance: Light orange or a pale honey. Looks to have a light body, even with the 100 proof.

Nose: Bright cherry, with a dash of toasted honey, or perhaps brown sugar.

Palate: This is where things get fun. Fruit with a long finish. Opens with a bit of maraschino cherry and then late harvest blueberry. There’s some orange peel lingering in the background of the finish. Some oak in the middle. I know there are a lot of flavor words going  on Caround here, but really, this whiskey is an experience.

I was really surprised by this one. Complex, in a simple way, as there were evenly spaced layers of flavor. The fruit elements sing. One supposes it may depend on if one has a preference towards more wheated bourbons or a touch more rye spice. However, I believe this to be a win, regardless of grains of choice.

4.5
User Rating 3 (1 vote)
Sending
149
Shares
5.4k
Views
Share on FacebookShare on TwitterGet Our Newsletter
Cheers to the Dads! Personalize a bottle of his favorite whiskey to create a modern gift for the modern man. Use code: FATHERSDAY20 for $20 off your next order of $100 or more at ReserveBar