Editor’s Note: This whiskey was provided to us as a review sample by Grain & Barrel Spirits. This in no way, per our editorial policies, influenced the final outcome of this review. It should also be noted that by clicking the buy link towards the bottom of this review our site receives a small referral payment which helps to support, but not influence, our editorial and other costs.

Many a whiskey brand claims old roots. Chicken Cock goes right for it: “The Famous Old Brand.” You can read at length about it, from its establishment in 1856, to its spread west, to its recreation as a medicinal product near the end of Prohibition (it was aged in wood, after all!), to its slow demise thereafter. Perhaps its most interesting boast: it was house whiskey for The Cotton Club.

This famous Harlem club began life in 1920 as the Club Deluxe, owned by Jack Johnson, the first African-American heavyweight boxing champion. His spot was a supper club. Just a few years later, the tables of equity were turned when the gangster “Owney” Madden purchased the space, redid the interior and forbid non-white patrons. Madden proceeded to make it into the number one cabaret in Harlem, its draws being mostly Black musicians and chorus lines.

Despite this blatantly racist imbalance, the roster of regular performers reads like a who’s who of early 20th century jazz: Duke Ellington lead his orchestra as the house band, and he was succeeded by Cab Calloway. Louis Armstrong played there and Lena Horne started as a chorus girl, later starring in her own shows.

Of course, during Prohibition a club run by a gangster had whiskey, and for The Cotton Club it was Chicken Cock. According to Ellington, “You could always buy good whiskey from somebody in the Cotton Club. They used to have what they called Chicken Cock. It was a bottle in a can, and the can was sealed.”

After its dry-time highs, Chicken Cock’s stock dwindled until a distillery fire all but erased it in the 1950’s. Spirits marketer Matti Anttila revived the brand with sourced bourbon in 2011. These days, Bardstown Bourbon’s Collaborative Distilling Program is responsible for making the juice.

Now, about the name, is it redundant? Is it a crude reference to specific poultry anatomy? Is it a term of endearment, à la Manchester, England? Is supposed to make you want to drink it more? None of my sources were conclusive, so I’ll stop mulling and taste some whiskey. 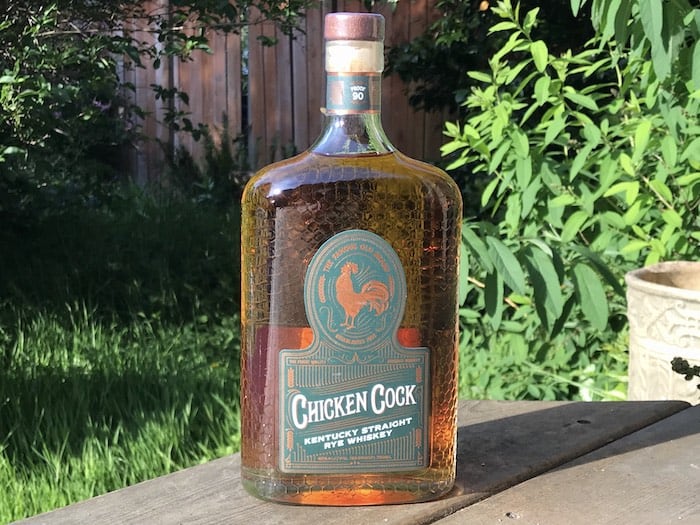 Vital Stats: Chicken Cock Kentucky Straight Rye is 90 proof, made from 95% rye with the remainder undisclosed and aged at least two years. It’s available at select places in many markets, and a 750mL goes for $70.

Appearance: This rye is a very clear medium copper that quickly forms medium tears. The honeycomb-textured apothecary bottle is a nice touch.

Palate: The palate is heavily spicy: allspice and cedar upfront, a little fire on the mid palate softening to ripe peach. Sandalwood and black tea hit the back palate for a medium finish.

Chicken Cock Kentucky Straight Rye is pretty good. Spicy enough to stand up, and not so hot that you wouldn't want it neat. It's not going to blow your mind with complexity, but it's not dull either.