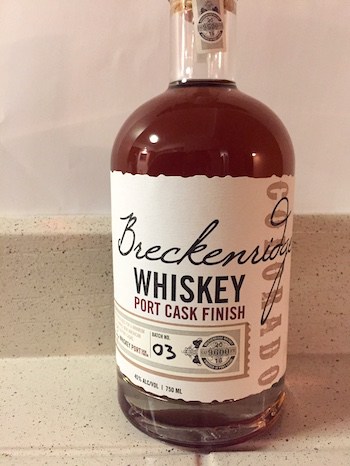 I wasn’t entirely sure what to expect when I popped open this bottle of Breckenridge Whiskey Port Cask Finish, simply because bourbon and port are a fairly uncommon pairing. Breckenridge’s version is made with their popular high-rye bourbon, which is then finished in ex-port barrels for four to six months. I found the sweetness of the bourbon pairs nicely with the fruitiness and tannins added by the port barrels.

Breckenridge Distillery sits 9,600 ft. above sea level in Breckenridge, Colorado, a town of just more than 4,000 people. Since opening in 2010, they’ve become known for their high-rye bourbon, but they have a nice variety of vodka, gin and bitters to choose from as well.

This particular port-aged bourbon was a very limited release, with it being reported it was released just a few months back. The ex-port casks in themselves were actually quite old, ranging in age to upwards of 20-years.

Breckenridge is currently deciding, based upon customer feedback upon this release, on whether to try its hand again sometime in the future in similar experimentations.

Appearance: The bourbon has a full amber color, undoubtedly influenced by the port aging. Not light but not dark, the liquid was light-bodied with limber legs.

Nose: Initially caramel and vanilla stand out, along with a peppery rye. To me, the scent seemed to be hiding something, and that became very apparent once I put the glass to my lips.

Palate: There it is! A lovely, sneaky vinous flavor. Mellow beginnings melt into a warm rye. After two or three sips, the vanilla and caramel notes open up and I could taste the port finish in the dark notes that reminded me of freshly dried fruit. The spiciness of the rye was definitely mellowed by the fruit flavors from the port finish.

I also appreciated the way the port aging added a dry ending to an otherwise sweet-tasting bourbon. Banana and brown sugar also present themselves in the flavor profile.

I enjoyed this whiskey quite a lot. It was a very easy drinker, served well with an ice cube or just straight. This whiskey was so good, I almost drank the entire bottle. Now, I’m left hoping the distillery might grace us with another batch of Breckenridge Port Cask Finish so I can share it with family and friends, stash it for a rainy day, or hoard it all for myself.